A strange tale (in two parts) 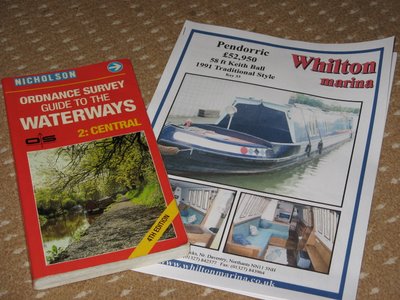 A written account can't really convey the jaw-dropping, spine tingling, hairs-standing-up-on-the-back-of-your-neck way this actually felt at the time, but I have to pass it on anyway ...

Since Easter, Warrior has been at Stretton Wharf boatyard; we were sent there by the Russell Newbery people (and very nice it's been too, although it would be even nicer to have an engine). Keith, who owns the yard, first appeared on our radar in 2004 when we started seriously looking at narrowboats - he was the builder of the first boat we really fell in love with (but couldn't afford), Pendorric.

A couple of weeks ago, Jim and I were sitting in our kitchen, 200+ miles from Stretton, talking about Warrior, when our neighbour Sophie knocked on the door. Her friend Jacquie had been having a clearout, and wondered whether we could use a Nicholson's guide she was throwing out. As we stood and chatted I casually opened the book to have a look at the date, and saw the inscription 'Merry Xmas Margaret '89, Happy travelling in 1990, Keith ...' , and his wife and sons' names, making it obvious this was the same person we'd just been talking about. After we'd recovered from the shock, Sophie told us the little she knew, which was that Margaret was Jacquie's mother, and that she had been having a boat built, but sadly had died before it was completed.

Naturally, when we went up to Stretton a couple of weeks ago I wasted no time in telling Keith about this extraordinary coincidence. He recalled Margaret, and her daughters, because it was him who was building her boat.

And the boat was Pendorric.
Posted by S at 2:50 PM