As I walked out one misty morning 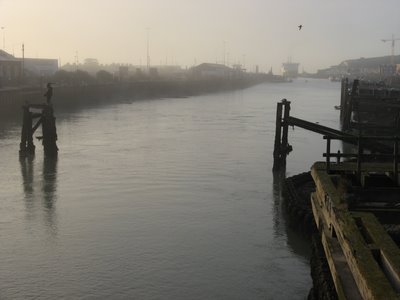 I've mentioned a few times that there are no canals near where I live, but we do have a river, the Sussex Ouse, and I nipped out (five minutes' walk) this morning to take some pictures of the misty estuary. In the late 18th/early 19th century, the river was made navigable from here for 22 miles to the north, via 19 locks, but this was (a familiar tale) never commercially successful.

The navigation served only rural areas, and cargoes were mainly of chalk, lime, manure, aggregates and coal, with fifty one barges registered in 1801. The upper part of the navigation was effectively abandoned by the 1860s, although trade on the seven or so miles from the county town of to the sea continued into the 1950s, and today, in the estuary, aggregates and sometimes other bulk goods are still unloaded from ships to be transported onwards by road and rail.

I abstracted much of this information from the Sussex Ouse Restoration Trust website (I know, it's disgraceful that I didn't already know it). What I do know, however, is that this is also the river where, in 1941, near Woolf filled her pockets with stones and drowned herself, and the river that flooded Lewes in 1960 and 2000. There was a photograph, which I can't now find, in which it looked as if we did have a canal - but it was Lewes railway station, floodwater almost level with the platform edges.