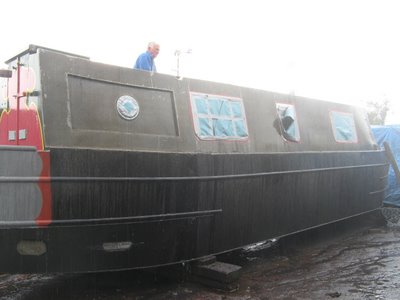 Andante naked in the rain ...


In which I venture into giving advice … (with all the usual caveats, of course)

In the end I had both Andante’s hull and cabin gritblasted, although not at the same time. From that experience, and from talking to the bloke that did it, I offer the following pearls of wisdom.

1. Having your hull gritblasted is probably on balance less trouble than scraping all the weed, crap, rust and old blacking off with a scraper and a wire brush.

2. It is of course more expensive – unless you could use the three days that it would take you doing it yourself to earn some money doing something else.

3. Stuff something (removable) up your sink waste outlets, and stick (with gaffer tape) the plug in at the other end. Otherwise you will get a sink full of grit at the very least, and if you have a u-bend, its contents will be sprayed up the walls.

The cabin is more trouble – but might also be of greater benefit if you want a really good start to repainting.

4. Grit will get in everywhere if you let it. Tape up all vents on both sides; tape round the inside of all opening windows and window drain holes. Tape round the doors after you leave. Don’t light the fire and sleep in the boat after doing this. Don’t forget the gaps at the top of the rear doors (voice of bitter experience and a gritty engine room).

5. Handy hint I thought of all by myself: remove the grilles from ceiling vents or they will just act as a receptacle for grit that will fall out over the next few months. Instead of taping or masking over the holes in the ceiling, tape small tubs underneath And seal round them. That way it won’t all fall on your head when you unmask it.

6. The main reason for masking the windows (on the outside) is to protect the glass. Start by running a line of gaffer tape all round the outer edge of each pane. Tape your heavy duty polythene to this or to the glass itself. Cover any gaps with more tape. Finish with a line of tape on the window frame. Don’t let this extend onto the paintwork – the whole point of the gritblasting is to get under the paint so it would lift the tape too. Make sure there are no loose edges, ditto.

7. If it’s cold or damp the tape won’t stick and you’ll be wasting your time. So try not to run out of tape at six pm with the nearest B&Q half an hour away.

8. If it’s cold and damp (see above) lighting the stove and ramping it up like a blast furnace helps. (Unless, presumably, you have exceptionally good insulation) As you have already taped up all the windows and vents, best leave the doors open while doing this. This also works following the heavy two minute downpour that will happen while you’re putting the primer on.

Nice reading about your narrowboats - I picked up yout link from Granny Buttons web site. I have a share in an ownerships boat that just doesn't quite seem enough at the moment..... (www.sylph.org.uk)

What are the plans for Andante, is she still for sale afte the paint job? And what is the paint job going to be? It's still a pipe dream to own my own boat at the moment, but I have a habit of turning my dreams into reality - my wife can confirm that.

Take care and keep up the posts.

Hi Nev
Thanks for going to so much trouble! Yes Andante is still for sale before, during and after the paint job - the appollo duck ad (which I hasten to add I didn't write) is at http://narrowboats.apolloduck.co.uk/feature.phtml?id=47762 and there are more photos on the webshots site, link on Warrior's blog. Current plan is to paint in same colour scheme as before, but of course all that could change if there was a buyer on the scene ... will sell at any stage and price would obviously reflect stage reached! Apparently there's been a lot of interest/admiration for the boat but most people want something bigger. If 32' is big enough for you I don't think you'd find a better looking boat at the size. Oh dear, gone into sales mode.

Thanks for the reply - one question, what is the reported plate thickness on Andante, and has she had the base plate replated/repaired?

10:6:4; no, has never been replated but is in excellent condition. Has always had anodes (and you can see in the pic they are wearing at about the right rate!) and has no 240v circuit. It is, as far as I know, still out of the water. We are planning to go up to Stretton Wharf (this is where the A5 crosses the SU)at the end of this month if you were interested in meeting - where are you based? Or you could ring Keith to view as per the ad but he won't be around for a while as he is bringing his GU boat down to London. Sorry if I'm rushing ahead of you here ...

Not rushing ahead at all, however we have a couple of irons in the fire that I'm afraid are for bigger boats. I'll keep an interested eye on the repaint....(and the web site of course)

Is Andante still for sale? How is the paint job going?

In looking at photos, it wasn't clear to me if the engine was boxed in. Are any of the furnishings, kitchen gear, tools included in the sale?

Could the boat stay on the present moorings over winter? We are not in the UK and wouldn't be able to come cruising until spring.

Hi Michelle
Yes, the engine is boxed in - but the boxing is easily removeable, as you can see from the pictures, for maintenance and taking photos!

The boat is now safely in two coats of primer; we will be undercoating in a couple of weeks, weather permitting, but probably won't now attempt the top coats until spring, as it's much harder to get a good finish when it's cold.

Some stuff is included in the sale, some (esp the Le Creuset!) will be coming with us to Warrior. Furnishings and soft furnishings are all staying; would be happy to discuss individual items.

The boat doesn't actually have any moorings as such but is on brokerage at present; it would probably be possible to negotiate for it to stay where it is until the spring - winter stoppages at Audlem are limiting movement northwards anyway.

Thanks for the interest