A bad photo, and a good excuse 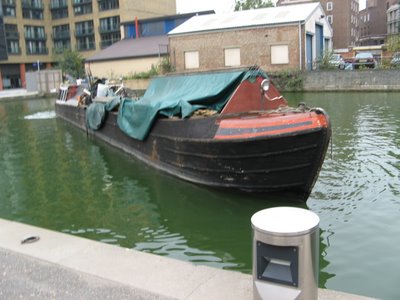 Last Tuesday, I think it was, I decided that it was about time I went and had a look at Little Venice. The image conjured up by the name, so redolent and romantic, was not really lived up to by the reality; it was very quiet and, I thought, rather soulless, particularly walking up towards Paddington.

I experienced the traditional friendly welcome when I got the camera out in Paddington Basin – a besuited chap appeared from nowhere to say that this was private property and taking pictures wasn’t allowed. I took it anyway (but that’s my excuse for it being so shaky) and murmured sympathetically about how they must be very concerned about burglars casing all those expensive flats. ‘Oh no’, he said, confidentially, ‘It’s much worse than burglars. It’s terrorists. You just don’t know what they look like these days.’ I dare say that’s true (should I be flattered?), but I don’t suppose a dedicated terrorist is likely to be deterred by the inability to take a souvenir snapshot of his target before obliterating it.

As soon as the guy approached me I remembered reading about this happening; and I’ve since talked to people who have had it happen to them too. Just how many security suits are actually patrolling the place, and why? (Real terrorist targets get real police patrols, don’t they?)

Anyway, I saw this boat winding in the basin, and as I have lately been honing my ability to recognise a Grand Union boat* when I see one, and wanted to test it out, I engaged the owner in conversation as he moored. He turned out to be a man of few words.
Me: What is it?
Him: What?
Me: Your boat, what is it?
Him: It’s a boat.
Me: Do you know its history?
Him: It’s an old working boat.
[well, I wouldn’t have been asking if that much wasn’t fairly obvious, would I?]
Me (the killer question): What’s it called?
Him: Tadworth. 1937.
Me (to self); Yes!!!! [nods sagely]

*Large Woolwich, I was going to put, but just double checked and Tadworth is a Large Northwich. If there is a difference visible to the naked eye, then it's too advanced for me.
Posted by S at 11:12 AM