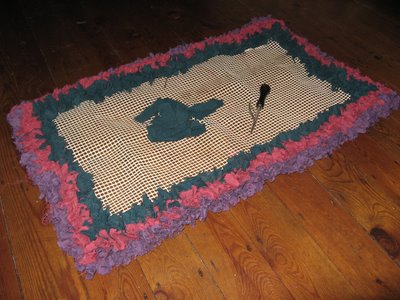 When it comes to the feminine arts, I’m no slouch, really. I can cook, and sew (not so hot on making flowers grow); I can do tapestry and embroidery and dressmaking. I am quite possibly the youngest person in who knows how to darn. I can knit – fairisle, cabling, pictures, frills, lacy bits – I can do the lot. But can I crochet? Despite my best efforts, that single hook defeats me. My attempts at cabin lace end up as so much tangled string.

So I have given up on that traditional art for the moment and turned my hand to another – I am making a rag rug for Warrior, and so far it seems to be coming along rather well. I’ve made woollen rugs before, and the other sort of rag ones, where you use a continuous strip of rag and pull loops through to the front, but with this one I’m largely playing it by ear. I know it’s really not the right sort of canvas, but I think the final effect should be all right.

The surprising thing is how much rag it uses – that’s nearly three whole large men’s shirts so far, cut into 3/4 x 2 inch strips, and I am about to raid Lockboy’s wardrobe. What I can’t work out is where they used to come by so much rag in the days of working boats. Until relatively recently people had far fewer clothes and less stuff in general, and were far less cavalier about throwing them out. Boat people, presumably, would have had even less than the average for the time. So what did they make their rugs out of?