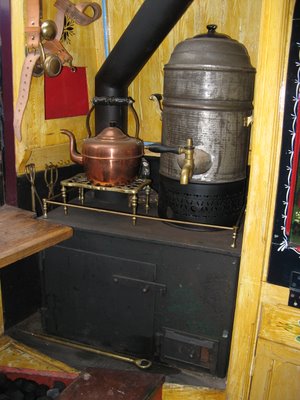 After tidying up the cabin I attacked the stove. This is a standard ‘boatman’s’ type stove with an oven, but not a commercially made one; it was made, presumably, by John Shotbolt himself. When we first spent time on Warrior last Christmas, it worked quite well. It even heated water, and a radiator (in the bathroom), very efficiently via its back boiler.

On every subsequent visit however, it has refused to draw, and frequently even to light. A good poke about established that the chimney was clear, and we were starting to think we might have to replace the stove, at not inconsiderable expense. But then it dawned on me that there is only a gap of about an inch between the bottom of the chimney and the inner lining of the oven, the chimney being on the opposite side to the firebox. Any crap falling down the chimney (and there was bound to have been plenty, given the locks we bashed on the way down from Hargrave and the craning in and out) would just sit on top of the oven lining at the bottom of the chimney, blocking it very effectively.

But how to get at it? The only removable plate in the stove top is the one on top of the firebox. This, as far as I can see, is the only access. So I got a small piece of wood, the maximum length that I could work in through the firebox, which when held in the tips of my fingers just reached under the chimney, and patiently scraped away, guiding the soot and rust flakes across the top of the oven and into the firebox, where they could fall through the grate into the ashpan. And after a couple of hours and a rather bruised and scraped right hand and wrist, I had an ashpan full of the stuff.

It was well worth the effort, though, because now it works better than ever, lighting easily and staying in very well, and with no smoke in the cabin (unlike before when poor Baz had to sleep with the doors open despite the canal being frozen). Some sort of wire handled brush, or failing that, a big bottle-brush, would make the job easier next time.