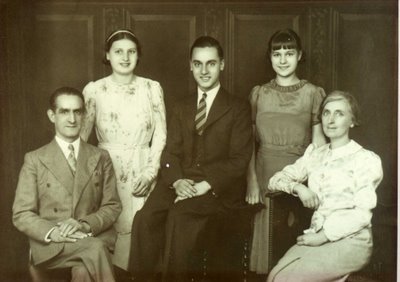 My father would have been eighty-nine today, if he hadn't died in 1992. That's him in the middle, aged about seventeen, flanked by his sisters Doreen and Ina, and his parents. I'm often sad that I can't share our boating activities with him, as I'm sure he would have loved it.

It must be him I have to thank - either via genes or early upbringing - for my interest in industrial history and engines. His father - my grandfather, whom I never met - was a boilermaker on the Great Western Railway, who met my grandmother on a company trip to Jersey. He whisked her back to Swindon and married her despite her not speaking a word of English (and he, presumably, not being fluent in Jersey French).

Leslie wasn't on the whole what you'd call a very hands-on parent; being 48 when I was born, he was rather more old fashioned in his outlook than was even usual for the time. (He was quite self conscious about this, and my sister and I were adults before we found out how old he was. When asked, he would always reply 'as old as my little finger and a little bit older than my teeth'.) But I have very vivid memories of the times he would take me (just me! Because I was the biggest!) on the train to London to visit the Science Museum, the Natural History Museum or the V&A there was such a sense of occasion about it.

Most of his career was spent in a desk job (all we knew was that he was a 'civil servant'), but when he retired he threw himself into the establishment of the British Engineerium, a steam museum housed in a former pumping station in Hove. Once it was up and running he worked there as a volunteer, doing the books, taking round school parties, and stoking the boilers, right up to the end of his life. It was a marvellous place, full of beautifully restored, and working, steam engines, and models, and other industrial (and some domestic) artefacts, and I absolutely loved it there.

Just as he would have loved Warrior, and everything that goes with it.
Posted by S at 11:49 AM