Are you sitting comfortably? 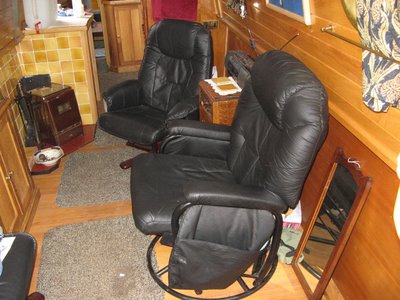 Then I'll begin. Warrior came complete with these two chairs. Lots of narrowboat owners seem to favour furniture of this ilk. I hate them. I hate them for the following reasons:

1. They are ugly
2. They take up a lot of space
3. They are heavy and difficult to move (especially the especially ugly rocking one)
4. They are ugly
5. They are completely out of keeping with everything else on the boat
6. Even though they are very expensive, they look as if they came out of the Viking catalogue
7. I wouldn't have them in the house, so why would I have them in the boat?
8. They are dark and gloomy and intrusive
9. They are so bloody spirit-sappingly, heartbreakingly UGLY!!!!!

But they have their good points:
1. They are comfortable

And therein lies the rub. Would you sacrifice comfort, at the end of a long hard day's boating, for aesthetics and mere convenience? Well, yes, I would, like a shot. But there are two of us involved here and Jim values his comfort very highly. So we are engaged in a search for a compromise: a seating arrangement that is both comfortable and attractive. So far, we have had little success ...

P.S. That photo was taken before I tidied up. It all looks much more respectable now.
P.P.S. Ignore the baby stove - we're putting the French one in after all. Hooray!!
Posted by S at 12:48 PM

Ha! Glad I'm not the only one that feels that way, I don't like that style of chair either. No idea what I'll do with the empty space in my boat either, but I'd rather sit in the floor that have a 'comodores chair' in here.