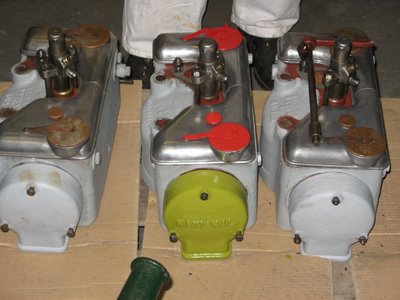 We spent an hour at the RN works in Daventry on our way back on Monday night, chatting to Allister and Brian. They now seem to like our engine a lot ... in particular, Allister raves about the quality of the casting. They just don't make them like that any more, apparently. Progress is pretty much as Jim reported a few posts back - but now there are new pictures! Only nine of them, because the camera battery ran out, but enough to see that progress really is being made now, especially if you go back to the beginning of the album and look at how it was. And what a treat - they'd broken out the paint (which Ian collected from Craftmaster the other week), just to see what it would look like for us. Well, I still like it a lot.

We also collected some souvenirs from the rather large pile of bits destined to be thrown away, including all three cast iron pistons, plus con rods and liners, and various smaller bits out of the gearbox. Novelty paperweights all round!
Posted by S at 8:44 PM