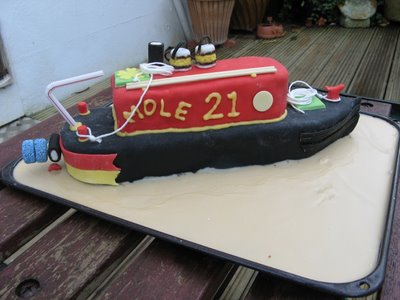 Yesterday was Number One Son's birthday; on Friday night I decided that I should make him a cake, like I used to do when the boys were small. And as he enjoyed our Huddersfield trip so much, I thought I would make him a narrowboat cake. Now when I say make, I don't mean literally from scratch. I like baking, and do a lot of it, but for carving into interesting shapes, I've found shop bought cake to be much easier. In this case I didn't have much time either, so I popped down to the local supermarket as soon as it opened at 8 am for three Macvities chocolate cakes (very nice and chocolatey they are too). I was going to buy white fondant icing and colour it as best I could, probably to pale blue, for the boat, but next to the boxes of white stuff were packs of coloured fondant, in red, green, yellow, and ... black. Black icing! Well, I wouldn't eat it, but the possibilities for my project were too promising to resist, so I bought two packs. I also got a packet of liquorice allsorts (myriad uses), some white chocolate buttons (portholes), a big box of icing sugar and some liquorice catherine wheels.

I began by trimming the tops of all the cakes flat, then I took two of then, the right way up (i.e. wider at the top), cut one end of each off straight and butted them up to each other. Then I trimmed the other ends into shape for the hull, rolled out the black icing, laid it over the top, and smoothed it down the sides. That shop bought fondant is very flexible and much less liable to crack than home made. For the fore end I cut out the excess icing (with scissors) leaving a margin of about a quarter of an inch either side, and and pressed the overlapping edges together. I was very pleased with the effect, although maybe I should have put in some rivets ...

Next I mixed a lot of runny glace (water) icing with coffee to give it an authentic canal colour, and flooded a shallow baking tray with it, then very carefully lifted the hull into it. Now I could start on the cabin, for which I used the red icing, in honour of Andante. This time I turned the cake upside down so the wider part was at the bottom, smoothed the icing over and tucked the edges underneath. The icing was stuck on with apricot jam - I do believe in doing things the traditional way!

Then the fun really started. The signwriting was done in glace icing ('Mole' is Aaron's nickname), and a line around the bottom of the cabin neatened up the join. The remainder of the icing in the piping bag was kept for use as glue. The hatches were just cut out of rolled out green fondant, and for the pattern on the slide I used a handy little cutter and very thinly rolled yellow fondant. The chimney is a liquorice allsort, and the cans (of which I'm very proud) are made of those multi layered allsorts (for the stripes) trimmed down to shape, with handles made from slivers of liquorice. Allsorts also served as the rear fenders; I toyed with a front one; there was a sweet just the right shape, but in the end I couldn't see how to fix it, and anyway, I didn't want to hide my handiwork, which by now was set off with some very effective strips of liquorice.

All of it is edible (if you include the black icing) except the shafts (bamboo skewers), ropes (string) and tiller (a drinking straw, the least satisfactory part. I really wanted to use one of those stripey candy canes but as well as being too fat, they were impossible to bend without snapping). Everything else is shaped out of fondant and stuck on.

I liked the finished product so much that Aaron is letting me keep it until tomorrow before taking it away and eating it!
Posted by S at 7:02 PM