The rug is finished! 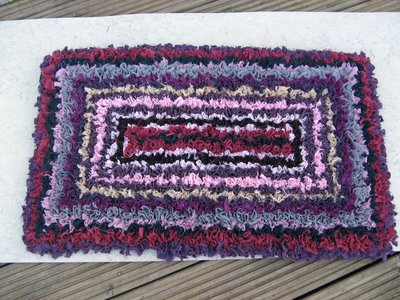 The rag rug which I started a fortnight ago was finished last night - much faster progress than I'd anticipated, especially as I was only working on it for an hour or so each evening. I am very, very pleased with it. It's very dense and springy, almost more like a cushion than a rug; I think the tufting might be rather more dense than is usual. I remarked before on how much rag it required - the final tally of what it consumed is:
3 shirts
3 1/2 pairs of trousers
2 blouses
1 skirt
1 pillowcase
1 pair of pyjama bottoms
- a whole wardrobe, in effect!

There's cotton, wool and linen in there - I varied the width of the strips according to the thickness of the fabric. I avoided artificial fibres (didn't have any anyway), but successfully used both woven and jersey fabric.

Although we had originally planned just to paint the floor in the back cabin, this looks less likely now. Firstly it has vinyl stuck to it, which isn't going to come off smoothly, and secondly, the board underneath isn't ply, but that rather bitty stuff (Primaboard?), and it wouldn't look very good. So we thought we would try to get some black and white check vinyl to replicate the lino that was popular for back cabins. No luck - despite it being, I would have thought, a classic design, it seems there's no call for it these days. Anyway, we then had second thoughts about having vinyl - for a start, it's very environmentally unfriendly, unlike real lino. And we happened to have an offcut of the real thing, which is of course very trendy and expensive now, left over from a job Jim did in Brighton. It's not black and white, but it is a pretty traditional lino design, just sort of swirly (you can't really see it in the photo, but that's it under the rug). So we will probably use that, if it's big enough.
Posted by S at 2:26 PM