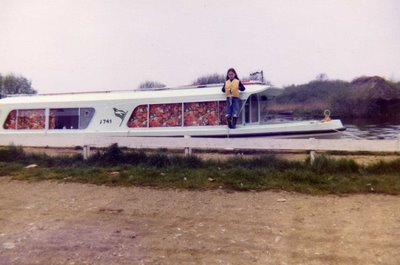 How did it all start? Like most great passions, almost imperceptibly. We - my mum, my sister Ali and I - had our first boating holiday in 1977. Like the two that followed, it was on the Norfolk Broads. There are no photos (at least, I don't have any) of that first trip, but I remember some things very clearly. The boat was called Si-Gi (we never were sure how to pronounce it), and we hired it through Blakes from Richardsons boatyard. It was a very small boat, and what I remember of it very closely resembles, in layout at least, a 24' Freeman ... I also have the idea in my head that it had a wooden hull, but surely not ...

We must have enjoyed it, because we were back the following year, with Hoseasons this time, and Sorrento, a typical plastic Broads boat of the time. Lots more space than Si-Gi, but I remember much less about it. I think that was the time we tried making Angel Delight (did I really used to eat that?) with a fork. It didn't work. The photo is of Ali, aged nine (I would have been thirteen). On each trip I bought a postcard map, and marked our stopping place each night with a pinhole.

Our third and final Broads holiday, in 1979, was on Regal Safari, a Safari 25 mk 3, which we hired from Hampton Boatyard on Oulton Broad (I know this because I wrote it all in the photo album). What I remember about this trip is a dove which alighted on the boat at Waveney, and stayed with us all day, at least - possibly longer. And we learnt to play Newmarket (a card game which I can no longer remember the rules of).

What did I like about it? Well, I did like the scenery (reeds, windmills, and boathouses, always intriguingly sinister for Famous Five/Secret Seven aficionados), and the birds and the bats, and the quiet deserted mooring spots. But more than that I liked the navigating, the naming of parts, and the slight air of adventurousness. And best of all, I liked jumping (naughty!) off with a rope in my hands; knowing how to tie it (well, better than some people anyway) and the fact that if I pulled it, A BLOODY GREAT BOAT (or so it seemed at the time) moved at my will. Unprecedented and exhiliarating power for a shy, spotty adolescent. Having always hated sport of all kinds, here at last was something physical that I could do.

And so the seeds were sown, to lie dormant for two decades before bursting forth a hundredfold with the discovery of boats that are actually beautiful to look at, with gorgeous engines; big, heavy boats, with loads more parts to name; the physicality of locks ... I could go on, but I think that's quite enough for now!

We're off up to Stretton again tomorrow, just for a short weekend this time - hopefully seeing an electrician for Warrior at last, and dropping into RN at Daventry on the way home for the latest on the engine and hopefully some more photos for your delectation.
Posted by S at 8:37 PM