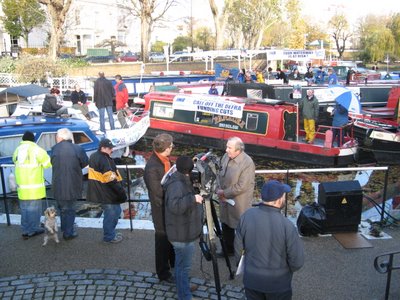 I'm not sure how great a threat the current round of funding cuts is, but I'm prepared to believe those who say it's dire, particularly if it's allowed to set a precedent. I also have reservations about just how much difference popular protest can make, once a decision has been made by government. The usual rule of thumb for lobbyists is that once a decision is in the public domain, the opportunity to influence it is long past. But again, it certainly can't hurt to stand up and be counted in advance of future funding decisions. What's more, coming together to show our solidarity is good for us as a community, as well as for the cause we've come together to defend - that goes for any group of people.

Anyway, we like a nice protest, me and Jim, and this was a very nice one (I haven't actually done that many, but Jim's an old hand): no police, no hostility, lovely people to meet, and boats to look at. With our boat a few hundred miles away, we offered ourselves as footsoldiers in Little Venice (only sixty-odd miles away). I haven't yet read up on what happened in other parts of the country today, but I counted over twenty boats participating in 'our' blockade, with maybe ten additional people on foot. ITV turned up, as well as the Press Association and local radio, that I know of. The event was well organised, with plenty of boat banners, placards, leaflets and petition forms to go round. I held a placard and smiled sweetly, while Jim dusted off his old campaigning skills with the petition clipboard. We got a universally positive response from passers by, and a high level of interest and concern.

Among our fellow footsoldiers were Martin and Rosemary Jiggens, whose boat Denebola was (IIRC) trapped on the Aylesbury Arm - and as a result of our conversation with them, we're about to become associate members of the Historic Narrowboat Owners Club (you don't actually need to own a historic boat to be an associate member, although the conditions for full membership are reassuringly stringent).

The only slightly disheartening thing was that despite all the efforts of Save Our Waterways to stress the interests of all waterways users - anglers, cyclists, walkers, local residents - in the cause, as far as I could tell, the only people who actually turned up were boaters (even if some of us hadn't brought our boats).
Posted by S at 7:50 PM