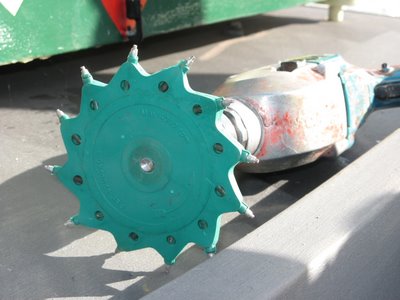 Before we could paint Andante properly, we had to get the old paint off. The gritblasting took care of most of it, and an orbital sander works well on the wooden doors. There are other metal bits however, including the rear deck and around the window frames. Most people seem to use a grinder around the windows, but this seemed a bit violent, and doesn't easily get into all the little corners. (And anyway, I have a bit of an aversion to anything that makes sparks, including sparklers. No bonfire night fun for me; I'm the one cowering in the corner going 'isn't that rather dangerous?') Or some people recommend a nail gun or scabbler for larger areas - very expensive.

But Jim found this rather nifty thing - nothing like I've ever seen before. It goes on an electric drill, used at relatively slow revs, and it works very well. It takes the paint off in little chunks - not flakes or powder, much easier to sweep up - and covers a larger area than it looks like it would, because of the way the rubber flexes. This is only the single version - they come in double and triple as well (and seven-fold, with its own machine, for the big boys). It's very controllable, gets into all the corners, and leaves nice clean metal. According to their website, it closely mimics the action of shotblasting. Theres another version, with little blades rather than points, for use on wood - we have got one but haven't tried it yet. I think they cost just over £20 each, and they're claimed to last a very long time - certainly ours shows no signs of wear at all.
Posted by S at 2:12 PM