Music to our ears 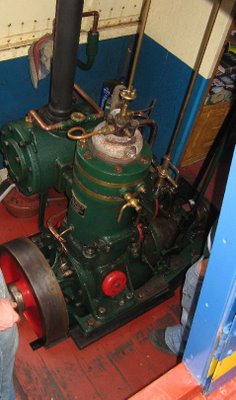 As well as being Lockboy, Baz is a bit of a musician. He plays the cello and the double bass (the latter in the county youth orchestra), sings, and is learning the piano. As part of studying music at college (AS level) he also does composition. Whilst watching the video he took of the working boat gathering at Ellesmere Port last Easter, he was struck by the idea that the rhythm of a Bolinder would make a very interesting basis for a composition. It's hard to describe to someone who hasn't heard it, but what basically happens (in some circumstances at least) is that as the speed of the engine increases, it starts to miss beats, until the speed returns to the desired level. (This might not be strictly technically accurate, and certainly isn't the whole story, but we're talking Art here). The boat in that case was Stour, and the recording was quite good, but short.

Having failed to find any other recordings on the internet, Baz put the idea on the backburner until such time as we got the opportunity to record some more lovely Bolinder sounds for ourselves. We must have been tied up next to Rudd (temporary home to Rick who is helping out at the yard) for months before I suddenly slapped my forehead and put two and two together, and then only on hearing it come back one morning from a trip to the pub. Baz wasn't with us then, but Rick agreed in principle that he could record the engine at some mutually convenient time in the future. 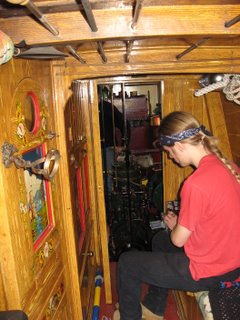 And so it came to pass, that last time we went up there Rudd was due to be taken to Norbury Wharf for dry docking (couldn't be craned because of its wooden bottom). Not only did Baz get to make his recording, he got to go on an outing on a restored 1936 josher too. Rick was brilliant at explaining how the engine worked; we got to watch them start it (with a blowlamp; it takes a very long time), and heard all about the boat's history. We actually made two separate recordings: Baz took the video camera with him on the boat, to record the engine from close up, and he set up the laptop, using Audacity, for me to record from Andante. As far as I know a splendid time was had by all, although Baz spent almost the entire trip hunched in the cabin and the engine room (the video wasn't very exciting), emerging only to help at Wheaton Aston lock. I just stood and watched (and recorded) as they disappeared into the distance. 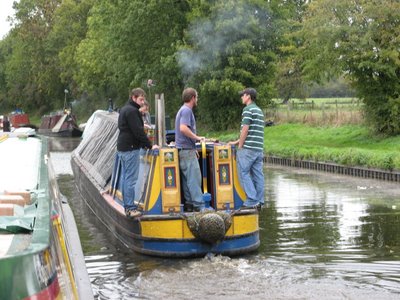 Love the Willie Nelson hair! (Baz didn't though, but I persuaded him it was in the interests of safety, as well as seriously musicianly looks.)

It's hard work doing these multiple pictures. I hope you appreciate it!
Posted by S at 2:48 PM