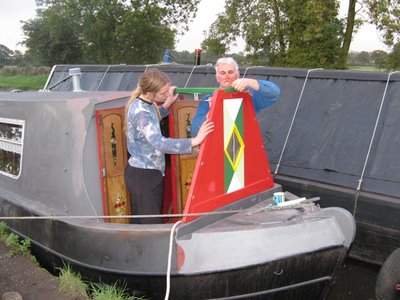 Andante's Apollo Duck ad has been updated to say that the hull and superstructure have been newly shotblasted and painted, and the cabin awaits new livery ... this is true, and you can have any colour you like as long as it's red and green, because we've already bought the paint - Rylard's Pirate Red and Meadow Green - and painted the cratchboard (I clearly can't decide whether that's one word or two). We've stuck with the same paint as before because it's simpler, it suits the boat, and we already had some. Of course if someone did come along wanting to buy it and paint it a different colour ... no problem! But until they do, that's what we're doing.

Not much will happen now until the spring - unless an outside chance of getting under cover comes off - but she should be safely wrapped up for the winter now in two/three coats of MIO primer (which is also used industrially as a finish for exterior metalwork) and new blacking, which I tidied up while we were up there. We put the cratchboard back so we could put the cover on, to protect the wooden doors from the weather now they are being rubbed down. 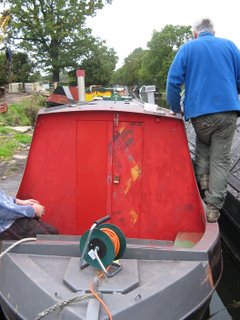 And what did we find under the (rather casually applied) plain red paint, but some rather neat diamonds; it was the same with the rear slide; a club had been painted over in plain green. I think Andante would look nicer for having these paintwork features restored - perhaps with a panel of diamonds on the slide - and hopefully we will. Jim has already made a lovely job of the cratchboard and previously, the roof box.

I seem to have selected a Blogger template which only lets me put a picture at the top of the post - unless I'm missing something - otherwise I'd post one of the doors too. If anyone can tell me a way around this (other than changing the template) ...
I don't want to change the template because 1. Hardly anyone else seems to use it; 2. (possibly connected to 1) The background colour is, by chance, almost National engine green.
Posted by S at 9:31 PM

the blogger puts the picture at the top but can't you cut and paste it into an area of your section of text? I am sure you have done this... so I am probably being stupid - or unusually technical!

Ah ... can you? I haven't tried that because I didn't think it would work. Will try tomorrow. Thanks!

It did work, albeit after a few attempts and with a bit of good fortune (i.e. I'm not quite sure how I did it as whether the picture would highlight or not seemed pretty arbitrary) Thank you very much. Now look forward to more highly illustrated posts!

excellent! I see it worked!

Askinstoo said...
This comment has been removed by a blog administrator.
5:57 AM