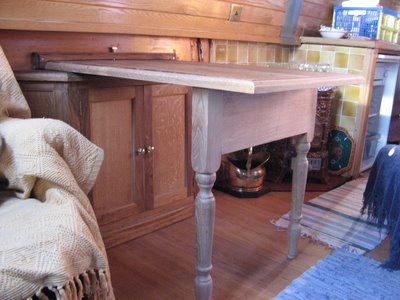 Well, its legs at any rate. Look at our lovely new saloon table, hand crafted, like the kitchen and the saloon cabinet, by Derek (of, I guess, Industry Narrowboats. About time I gave a plug to Keith and his merry gang) from the stock of English oak built up by his uncle over twenty years ago.

We were agonising for ages over what we were going to do for a table, assuming that it would be going on the port side between the chairs and opposite the stove; the breakthrough came just as we were leaving last time, when I realised that it might work better opposite the chairs, supported on top of the cabinet with its weight cantilevered off (against?) a batten attached to the wall, with detachable legs to share the weight and give it stability. A brief chat with Derek before we left, and on our return, as if by magic, the table had appeared.

As always, Derek's work has exceeded our wildest dreams. Rather than separate detachable legs (which I always suspected would be a bit fiddly) it has turned legs attached to a hinged section which folds back when the table top is stowed against the wall. A brass pin drops in to prevent the table top from sliding forward out of its retaining slot, which is rather more than a batten, being beautifully shaped and crafted to match the moulding on the cabinet.

Even with the rather unwieldy chairs, when the table is set up it doesn't prevent passage through the boat, although it is a good size: about 38" by 30" (I'm guessing the width and trying to remember the length!). Best of all, it looks like a 'real' table, not a 'boat' table. We've treated the top with a couple of coats (so far) of the Liberon tung oil which we bought for the iroko kitchen worktops, where it has done a terrific job of sealing the wood.

Talking of oil, we also bought some specialised Liberon stuff for the floor, although we haven't got our act together sufficiently to apply it yet. Sad as it will be to leave the little community at Stretton when we finally get our engine back, I yearn for the day when we have to worry about mud being trailed through the boat, rather than the ubiquitous fine grit which is the bane of my current floor-cleaning existence.
Posted by S at 6:35 PM

Like that table! I plan to do something similar for mine, might use your batten idea - hadn't thought of that one. :)

Take a look at Maia kitchen worktops. They're a great alternative to granite and can be re-sanded over time!