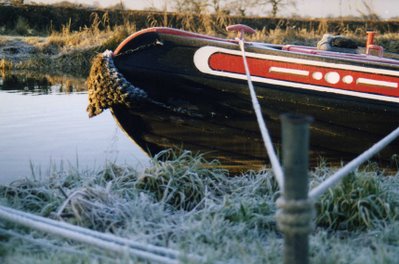 ... we were on Warrior at Hargrave and it was very cold. We travelled up on Christmas day, after opening our presents but before lunch. We took all our edible presents with us - a selection of chocolates and cheesy biscuits - and cooked Christmas dinner when we got there. One of the things that pushed us into going was the prospect of a fantastic temporary ice rink which was promised at Chester. This in fact never materialised. However we did spend this day last year at Chester Zoo, and had a lovely time.

The following day, I think it was, that the canal froze. We couldn't have gone anywhere in the boat anyway as the engine still wasn't starting. Amazingly, Ian came up (over? down?) that week too and spent a day coaxing and diagnosing it. We are of course now well into its course of treatment and it is essentially the Six Million Dollar Engine, in that it has been rebuilt at great expense, but hopefully will now have superpowers.

We spent the latter part of the week coughing like miners, and, with hindsight, probably nearly dead, owing to the sorry (far sorrier than we knew) state of the Squirrel, but it didn't half throw out some heat. Ditto the cabin stove, and at least Baz kept his hatches open in there. We even had hot water coming out of the taps - ah, heady days. As long as you remembered to run some hot water over the bath before sitting on it.

We came back on New Year's day, in the lightest traffic I have ever seen. At times on the M6 Toll we couldn't see another car in either direction; very spooky. Naturally we made excellent time ... After we got back I felt that I'd missed out a bit on gazing at the Christmas tree and decided that we should stay at home this year - and do you know what? Yep. This year I miss being on the boat. So maybe a Christmas cruise next year - who knows where?

Technical note: when we got back from Stretton last time we discovered that the cat had knocked the router on the floor and finally broken it beyond repair. So all my posts since then have been done on the laptop via the T-Mobile gizmo. When I look at the photos, the resolution looks very poor. If it looks bad to you too, that may be the reason. Hopefully we will get sorted out with a new router soon.
Posted by S at 8:45 PM