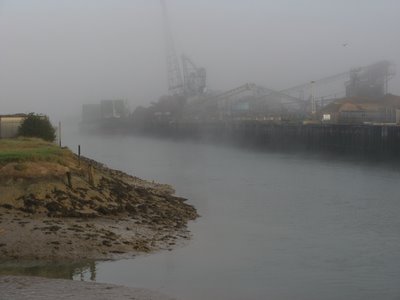 Today is an anniversary which is either amazing, or horrifying; I'm not sure which. As of today, I have been a resident of Newhaven, East Sussex, for a staggering twenty years. What a long time to stay in one place. Until I started a. looking for jobs all over the country, and b. got into boats, I'd scarcely left the south east of England, and my knowledge of the geography of the rest of the country was shamefully hazy. Born in South London, I was moved by my parents at the age of five into deepest commuterland, where I stayed until relative house prices and the desire for a bigger abode took me, my first husband, and a toddling Number One Son down to the south coast.

At first I didn't like it at all. We had a lovely house, but the town was small, and grubby, and above all - though I didn't give the fact enough weight at the time - strange to me. There's probably not many people would yearn for the bright lights of Haywards Heath, but I did. Until, one night, walking back from the railway station, I was stopped at the swing bridge which takes the A259 across the estuary of the Sussex Ouse, and had to wait for a ship to come through to unload its cargo of aggregate on the town's North Quay (pictured, as they say). It was an Arco ship, the Sand Swan, I still remember. And it was magical, the way it, sorry, she, came almost silently through, lit up in the dark, her crew going about their business on the decks, right into the heart of the town. And I thought that any town that could offer that couldn't be all bad.

Since then Newhaven has really grown on me. It's a fading industrial/ railway/ port town. The Dieppe ferry grimly clings on, but can't really compete with the much shorter Dover-Calais crossing and the Channel Tunnel, let alone the cheap flights from Gatwick. Aggregates are still unloaded, and scrap metal still taken away by sea, but when I first came there were also cargoes of fruit, vegetables, and particularly bananas, and a weekly column in the local paper saying what ships were in port and what their cargoes were; now no more.

A few more random facts about Newhaven. This town, with its population of 10,000, once boasted three railway stations. Newhaven Town, whence I left for London this morning, and Newhaven Harbour, for the ferry, are still operating. The third, Newhaven Marine, on its own branch line, served the boat train which ran from Victoria on the first leg of a journey which continued via Sealink and SNCF to Paris. The last one ran since I've lived here, but I can't remember quite when. The very idea of a boat train makes me come over all peculiar, as I picture the passengers in its heyday, dressed, in my minds eye, to a woman, in eau-de-nil chiffon and smoking cigarettes in long holders. The glamour!

Newhaven's comprehensive school was opened in 1968 in a blaze of radical optimism, with a uniform featuring the liberal use of orange bri-nylon, and a continental day (8 am - 2.15 pm). The former, to the relief of pupils, is long gone; the latter, to the chagrin of local shopkeepers, persists to this day. Its situation on the top of a cliff makes it a rather inhospitable place and the year before last much of it was destroyed in an arson attack. Neither of my children went there.

Newhaven has some lovely Victorian and Edwardian houses (I currently live in one of the former), and one of the few sandy beaches on the south coast (albeit the beach is privately owned and is currently closed and cordoned off because a lump of concrete fell off the sea wall last year and the owners are scared of being sued but too mean to fix it themselves). It has the river, along which there are nice walks.

Newhaven has not had the honour of having a Town Class boat named after it, although the next town along the coast to the east, Seaford, has. And you thought I'd gone off topic.
Posted by S at 1:59 PM

I think you are absolutely right - spent many weekends scuba diving out of newhaven - it is very atmospheric and always good fun dodging the occasional big boat. How long does it ake to London and do you do it every day? Julian B

Hi Julian, It takes about an hour and a half on the train, there are a couple of direct trains each day but usually there's a connection at Lewes. Plus the tube to Euston adds about half an hour. Fortunately I don't have to do it every day, maybe three days a week. Though I do love having a base in London, it's the best of both worlds!

Delighted to read your Newhaven description. In 1945 I was probably the first 15 year old schoolboy to make an exchange visit to France.We sailed out in an aged ferry and upon arrival in Dieppe was delighted to see a considerable crowd waiting for us. Commenting to a man leaning on the rail next to me he said "the last ferry blew up on a mine and they are anticipating the same thing"
Max Sinclair. Life President Droitwich Canals Trust and a very aged boater who had 'Vesta'.