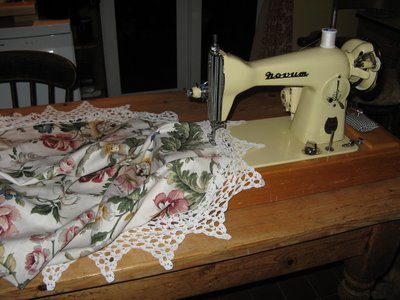 I've just finished making a set of curtains for Warrior's back cabin. It took me a long time to find some suitable fabric (without going mad and buying new, like we did for the ones in the saloon). However, a few weeks back I found some old curtains in a charity shop that were perfect; nice heavy linen with an old fashioned floral design, featuring yellow and pink roses and little blue flowers too. I bought both the pairs that were there, and have loads of fabric left over that might make cushion covers (if that isn't floral overkill. Can you have overkill in a back cabin?). Because I bought them all I didn't have to mess about sewing curtain tape on - I just used all the existing tops.

I've made a bed curtain - just the one, and only really for show, and a pelmet to go right across the ceiling, and they're both trimmed with some old crocheted lace that came off a table cloth which I got at a jumble sale many many years ago. I only hope the pelmet fits; I had to work out from memory where to put the gaps for the engine controls to run through, and how big to make them. I think ideally there should be a wooden, er, thing, running across the roof to attach these to, but Warrior hasn't got one, and it would be very hard to fit one now. Plus it would brain anyone taller than me. I can actually stand up straight in the back cabin, which is some compensation for being a shortarse. So I'm looking at finding some way of attaching the pelmet directly to the ceiling, and having a short rail for the curtain, only going part way across.

I also made some little curtains: one for the porthole, and some to cover the storage spaces under the bed cupboard and under the side bed (well, bench really. You'd have to be very small to sleep on it). These I trimmed with some very nice, smaller, cotton lace which I bought in Huddersfield for this very purpose. I made them all using my rather splendid old sewing machine, which was bought at a (different) jumble sale for £2. The make is called 'Novum' - which I've never heard of - and it was made in Ireland. It has a lovely 50s/early 60s look about it and must be terribly trendy in line with the fashion for retro kitchen equipment. It also works really well, and - most importantly - is very simple, unlike modern machines.
Posted by S at 7:21 PM