The first of a series of rivetting accounts of Little Jobs We Have Done On Warrior Lately.

After 100 hours (which we clocked up on our St Ives trip) it was time for the engine's first oil change. Jim got the oil at a local motor factors for considerably less than chandlery prices. 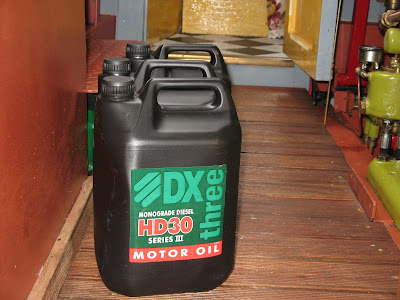 The old oil had to be removed via the sump using this fantastically useful device, a Sealey Oil and Fluid pump. 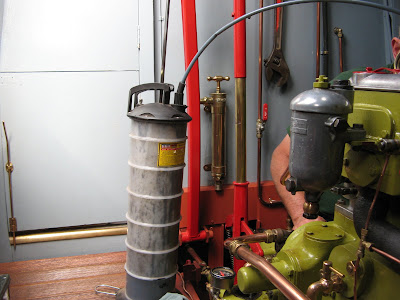 It's very simple, and very efficient. We've used it for the bilges too (when it didn't have old oil in it) before the bilge pump was wired up. It sucks it all up through its pipe, and then you just pour it out of the top. I was a little wary of getting too closely involved though as when something similar was attempted on Andante I ended up liberally bespattered with the black stuff. However, I had to operate the pump this time while Jim held the pipe in position and all went without mishap. The old oil was tipped into a suitable container and we brought it home to dispose of it responsibly, boys and girls. 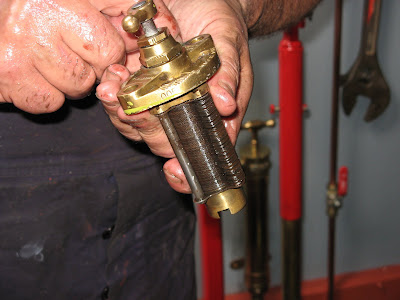 The marvellous old oil filter, the name of which I've forgotten, had to have its innards cleaned; apparently this used to be done in petrol but we wimped out and used white spirit. The filter traps particles of dirt and metal between the metal plates and turning the screw on the top encourages these towards its magnetic core. At least, we think that's how it works. (Jim says if he'd known I was going to ask he would have rung Compo and checked. So if you're reading this Ian...) In any case, it is a thing of beauty.

Then we put in two gallons of lovely new oil. That should last for the next 200 hours.
Posted by S at 6:47 PM