Proof if proof were needed

So when, at St Ives, someone leapt out at me from the C&R stand offering me a free copy, I took it, but explained why I'd stopped buying it. It turned out that this person was the editor ... oops! Then another person emerged from the back of the tent, endorsed my apostrophical obsession, and asked me if I was a schoolteacher ... well, close, I conceded. He turned out to be Leo McNeir, author of waterways thrillers as sold by the IWA (I had to buy one of course after that, so not a bad move on his part. I'll tell you what it was like another time). He sort of agreed with me about C&R, as he admitted that he always proofread his wife's cookery columns to save them doing it, but excused it on the grounds that it was written by enthusiasts, for enthusiasts. This may well be true, but I don't see why this means it has to be proofread by (boat) enthusiasts (as opposed to proofreading enthusiasts, of course) too when there are plenty of professionals out there at very reasonable rates... surely the editor of a national magazine should have a sufficient grasp of written English to do the task himself even if they can't afford to get anyone in?

Anyway, I politely kept this tirade to myself this time, and carried on licking my delicious mango frozen yogurt cone, and was persuaded by the urbane Leo McNeir to sign up to have a free copy of the next issue posted to me. It was waiting when we got home. And it had a great big typo ON THE FRONT COVER. I rest my case.

I've just looked at their website to see if there was an image of the cover in question that I could link to, but it doesn't seem to have been updated since last year - so here it is. 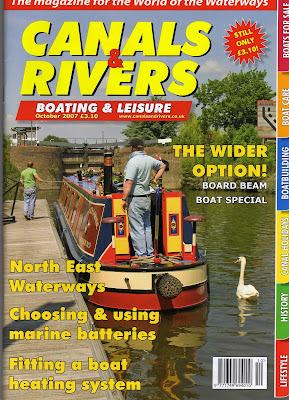 *This is a verbless non-sentence (well, this isn't (and nor is this) but the one marked* was). Oops; hoist by my own petard. Oh dear, so was that. But that wasn't. And nor was that. Or that. But that was .... This is what we philosophers call an infinite regress.
Posted by S at 5:36 PM