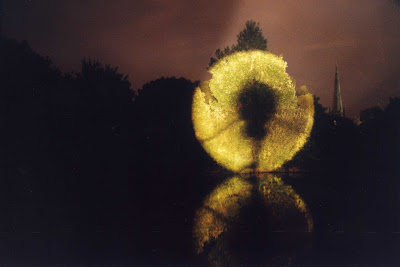 Back to the laptop and the T-Mobile card. Sorry about yesterday's abortive attempts - if you saw even one picture, you did better than me. I'll come back to them later. In the meantime, some real (i.e. taken on film and printed on paper) photos have just come back and I was quite pleased with this one. It was the night of the illuminated parade at St Ives. We, of course, had most definitely not entered into the spirit of the event (the theme of which was 'Roundheads and Cavaliers' - illuminate that!). However, when the people behind us on Black Cat put out a load of nightlights, I was inspired to break out our entire stock of candles (viz. 2) and install them on the roof. Anyway, once all the illuminated boats had gone by - and I was moved, in spite of myself, by the spectacle - Jim started messing about with the tunnel light. So I started messing about with the big camera. No tripod of course - I'm a boater, not a bloody photographer - so I plonked it on top of the milk churn on the foredeck and issued strict instructions to Jim on no account to move from one side of the boat to the other. I think it worked as well as might be expected. I like the way you can see the shadow of the bulb holder/deflector.
Posted by S at 7:27 PM

I think that it's a great shame that nobody has commented on this, it's a stunnin g photo. Go mum!
Love
Sx