To the frozen North once more 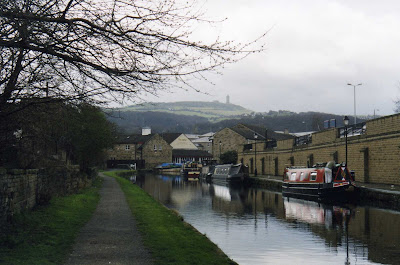 The huskies are fed and raring to go, my thermals are packed, and my native* guides await. Yes, I am returning to Huddersfield, land of my boat-dwelling days, on the flimsy pretext of doing some research into local government (well, that bit's true actually, but would you admit to doing research into local government? I thought not. Much easier to say you're just going for the pies). Naturally there will be time to revisit old haunts (possibly licenced, and I don't mean boats) to conduct informal interviews with former colleagues, and to check out what's been happening at Aspley since I left. I'll be particularly interested to see how they've got on with the wooden footbridge over the mouth of the basin, whether any other brave soul has taken over Andante's place, and whether the towpath side toilet is still, disgracefully, unavailable.

Getting there at a reasonable hour to catch people before they leave work for the day entails getting up at about five o'clock - a prospect that I wasn't really relishing. Then I realised that here, at last, was an opportunity to make the evil that is British Summer Time work in my favour for once. For of course, I've been getting up at five a.m. for the last six months (the fact that the clock reads six is just part of the wicked plot). So if I continue to go to bed at nine and get up at five for a few days after the clocks go back, I should notice no ill effects whatsoever. I was very pleased with myself for working this out. Until I remembered that on Saturday night I am going to a party - to celebrate the clocks going back - and so will be up very, very late anyway.

*This is not strictly true, as my hosts, Pete and John, are in fact from Eastleigh and Barnet respectively. The only real Huddersfield native I know actually lives in Brighton.
Posted by S at 7:14 PM

Hi Sarah.
Enjoy your time in Huddersfield. I recognise that picture... I think... It is opposite Sainsbury if I am correct, which is where we moored last year on a trip heading for the Leeds and Liverpool. I would be interested to know if the bridge is back etc as it was all closed when wer were there last summer. I found Huddersfield actually not bad. We hope to eventually take Hadar up there.

That's right Jo. Andante is in the foreground in this pic, it was just after we arrived, but you can see her long term mooring place on the left where there's that kink just before the water point.