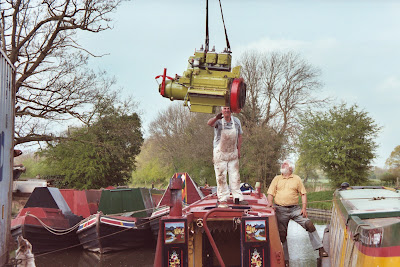 When we were at St Ives we met a lovely couple called Alison and Roger, and we treated them to a slideshow of our engine pictures. It turned out that Alison writes for Canals and Rivers (yes, the one I'm so horrid about) and she said that one of the mags might be interested in the story of our engine, especially as we had so many pictures. In fact, she thought Waterways World would be the most likely candidate, because of their stronger historical slant. I promised that I'd look into it when I got around to it - it was an attractive idea, but I wasn't really keen on cold calling with it.

When we got to Bill Fen we noticed a particularly nice little tug that really stood out. I mentioned it to Lyn; oh yes, she said, that's Kevin's, you know, the editor of Canal Boat. Fate or what? We got chatting to Kevin and Vicky later though I didn't have the nerve to mention it then. However, when we got home I sent him a brief proposal, and he liked the idea. He said he was looking for a story with a personal touch, but which illustrated the unexpected expense and time that a project like our engine restoration entails. I drafted out about 2,000 words - light relief from academic writing - and emailed it off to Kevin. He made quite a few suggestions for amendments to get the 'feel' right, and we discussed it when we were next at Bill Fen. I rewrote it - and it was now 2,500 words - and sent it back. Kevin then edited it and sent it back to me for approval which I was very happy to give; his little touches and excisions had improved it a lot.

Then we had to sort out the photos. Kevin looked at the web albums and picked out some he liked the look of; I then was to send him high resolution versions. That was the theory anyway. What I realised after he'd chosen was that some of the pictures - like the one at the top of this post - weren't taken with the digital camera but were ones I'd had scanned when the film was processed, and they're not sufficiently high res. Oh dear - I felt like I'd conned him with my promise of fantastic photos. A way was found around it though; I sent him the 7x5 prints and they were able to scan them at sufficiently high quality.

So I now wait with great interest to see what the finished feature will look like. It's due to appear in the December issue, out on November 8th, so get your orders in now. For someone who's used to academic publishing, that's an amazingly fast turnaround time. I wrote a book review the July before last, when I was still in Huddersfield, emailed it off and thought no more of it - a few weeks ago I was sent a copyright form by the editor of the journal (which I think had better remain nameless) saying that they should get round to publishing it within the next three months or so.

Also, Canal Boat actually pays money, or so I've been told (of course I'd have done it for the glory anyway, but it's nice to be a professional writer). Someone asked me what you get for writing academic articles. I thought for a bit and said 'not sacked.' Although to be fair my very first published article* was in Political Quarterly, and they paid me £175, which was a nice surprise. It's never happened again since. Until now.

*'Professor Macmurray and Mr Blair: The Strange Case of the Communitarian Guru that Never Was', vol. 73, issue 2, April-June 2002. Since you asked.

Hi Sarah. Congratulations on getting into the mags, I will definately look out for a copy.

Enjoyed the article, despite having followed the progress of the rebuild via the blog! Nice to have the story boiled down into a couple of pages.

Like Adam I enjoyed reading all about it here first (on the blog). It's come out well in Canal Boat. I should think all concerned are pleased with the article. I hope they've commissioned more!