I may be a cheerful old atheist, but I do like Christmas. Hell, I don't even mind calling it Christmas (after all we get to use a version of the pagan term for Easter); in fact, anything else just wouldn't be Christmassy enough. At work this year we are having a Winter Solstice party. Good idea. After all, every culture contrives to have a festival around this time of year on some pretext or another; you just need one when the days are cold and the nights are long. If it was down to me though I'd make it a little bit later... the rest of the winter after Christmas does drag the worst.

I do like choosing presents for people (and OK, I admit it, I like opening presents other people have given me too), and writing my IWA cards. I like putting the decorations up (a pre-Christian tradition, of course) and having a lovely pine scented real tree. It was even better when we used to get the tree from Jack's in Brighton, as he transformed his forestry business into a magical Christmassy world... sadly no more, and we now have to get the tree wherever we can. 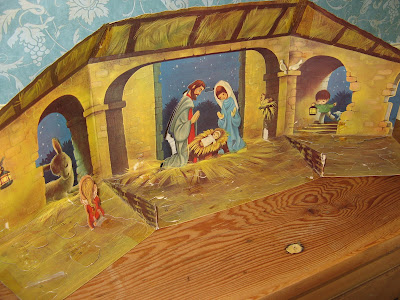 And I love my advent calendar. I can't remember when I first had this, so it must be about forty years old. It comes out every year, held together with ancient flaking old sellotape and more recently blu-tack. I've never seen another one like it, and I can't imagine why. It would be such a lovely gift for a child. It's a pop-up stable, with a sort of primary school play Mary and Joseph and a rag doll Jesus already in situ. The doors are all cut outs in the straw-strewn stable floor, and each day you open one of them to stand upright (nowadays with the aid of a discreet blob of blu-tack) and another character joins the happy throng. They're mostly animals, with a smattering of cherubs and shepherd boys, all drawn in that recognisably sixties style. Then after Christmas you just close them all down again, fold it away, and it's ready for another year. No chocolates, nothing to throw away. 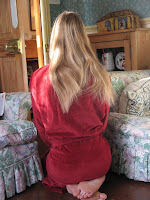 I know without looking now what each day's arrival is. Today it's a little blonde cherub. At least, I always assumed it was female, like you do - although of course actual biblical angels are all male, aren't they? But it may well actually be a little blond cherub. Like this one.
Posted by S at 12:14 PM

a quick google search shows that in Matthew 22:30 angels appear to er, not have genders.