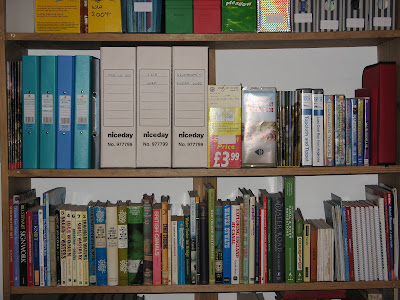 Went into Lewes today to finish off my Christmas shopping (well, pretty much). Obviously left my brain behind, because we got there, bought a few little things, and then went to get some more money out of the bank - oh no, I've left my card at home. I thought it was in my pocket but it's not, and it's not in my bag either... so back to the car park we go (having just paid £1.50 to the much-hated (it's a very long story) District Council to park there for two hours) and drive home again (it's about a fifteen minute drive). Dash up and look in my work bag - no, not there either; brief moment of panic, have I left it on the train? (My little Harveys wallet contains not only my bank card, but also my (£3,700) season ticket and my get-in-the-office-front-door card so this would have been a bit of a disaster). When did I last have it? Oh, hang on ... this morning, when I carefully put it in the zipped pocket of the bag that I just took to Lewes and brought back again. Oh dear. That's the sort of thing that gets academics a bad name. (Although I philosopher I know, I swear, came to work one day in odd shoes. I'm not that bad. Yet.)

So, nothing daunted, we headed back to Lewes again, and did manage to secure suitable gifts for my mother and my sister, and also went and had a look in a second hand book shop where Sebastian had told me he'd seen some canal-y books. More of an antiquarian bookshop really, very very nice, even had carpet, and lots of leather bound tomes. I wouldn't have dared set foot in a place like that when I was Baz's age. Sure enough, there were quite a few books, some of which I would have liked to buy but were a bit too dear. But I did come away with three (the videos will have to be moved to another shelf now in order to accommodate them). One is a slim 1945 volume in the Collins Britain in Pictures series (no. 84, so that must have been quite some series), English Rivers and Canals by Frank Eyre and Charles Hadfield, which I got because - surprise surprise - it has some nice pictures in. The other two are by a Dr David Owen - no, surely not THAT one! I think not, because he pointedly called himself David E Owen on one of them. They are Water Byways (1973), one of a series of three, and Exploring England by Canal (1986). These both look to be books about cruising, which I tend to prefer to books about canal building, mainly because I find them easier to relate to. I shall report in due course.
Posted by S at 8:38 PM