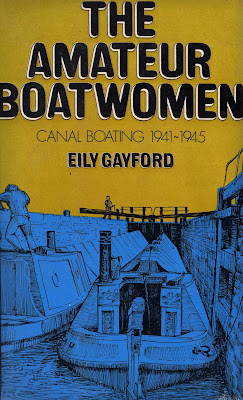 Susan Woolfitt's Idle Women is the best known, and without much doubt, the best written, of the books describing the experiences of the wartime 'trainee' female boat crews. But reading other accounts - notable those of Kit Gayford and Margaret Cornish (I haven't got hold of Emma Smith yet) does at least make you realise that there are other sides to the story that Woolfitt tells so well.

In The Amateur Boatwomen, published in 1973, Eily (she only became known as Kit once on the boats) Gayford provides possibly the more readable alternative account. This book can be read in a day; it is relatively brief. And it is brief largely because of its brisk and efficient style, rather, one imagines, like its author. It is not badly written, but the prose is very sparse (a welcome contrast, certainly, to the likes of my bete noire Gogarty); also there is not much sense of narrative. Perhaps because it was written some thirty years after the events it describes; perhaps just because it is Gayford's way, but it is almost as if someone said to her 'you should write a book about that', and she said 'All right then' and just got down to putting her most memorable experiences on paper, sometimes rather isolated from both historical and social context.

It probably helps to have read Woolfitt first to get some grounding in the world that is being described, although Gayford's matter-of-fact explanations usually do the trick. I actually like the unadorned style, but I would also have liked to read Gayford's take on the relationships that grew up between the women (and of which rather different accounts are given by Woolfitt and Cornish). Gayford is silent on this; her fellow female trainees (and later, of course, her own trainees, although this later period gets less coverage) are ciphers, while the 'real' boatmen and women are described with as much warmth as anything in the book.

To read Idle Women you would think that Kit Gayford was some sort of superwoman; Woolfitt clearly worships her; her confidence, her competance, her experience. So it is interesting to read in Gayford's own book of her insecurities; her self deprecating accounts of her own (at least early) incompetance, which she lists cheerfully and unabashedly:

I could not do anything to the engine, which used to need constant attention; I was always letting out the fire; I fell in (admittedly only up to the knees ... ) but one of them had to help pull me out; I put Molly's shoes in the oven to dry and forgot about them, and I never seemed to be in the right place at the right time.

Add to that her tales of messing up locks and draining pounds and forgetting windlasses - the very things that the likes of Woolfitt lived in terror of her wrath for - and Gayford comes across as rather more human, although the photos of her (and there are some nice photos in the book) show someone who certainly looks to be the no nonsense type.

There are no poetic passages to quote, but no excruciatingly bad ones either. The Amateur Boatwomen is a brisk and informative account of events, with little time for feelings and musings, and to be honest, it is none the worse for that. Another one for the Christmas list.

(Three here, and another three here, so plenty to go round again)
Posted by S at 8:42 PM