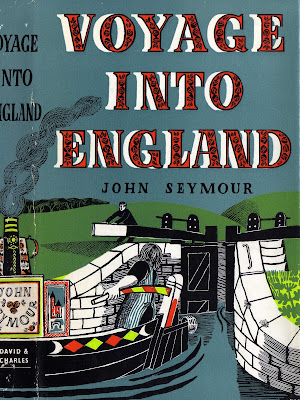 After excoriating The Water Road, I rather rashly, on the basis on one reading, said that you should read John Seymour's Voyage into England instead. Well, I've just read it again, and I hold to that.

Voyage into England recounts a four month trip taken by Seymour, his wife, three daughters (all with fine monosyllabic names) and a lurcher called Esau in 1963, on a 40' British Waterways hireboat called Water Willow. Seymour describes the boat as 'the forward end of an old Grand Union steel narrowboat, which has been divorced from the after end, and both ends subsequently made into pleasure-boats. Hence Water Willow has a good-looking bow, with the efficient lines of the working narrow boat...' This pleased me immensely when I read it, and I looked forward to drawing a contrast (still not entirely undeserved) with Gogarty's tin eye, but I have subsequently discovered from extensive researches (i.e. asking on Canalworld) that the front of Water Willow was in fact the back end of a Small Woolwich butty, so must sadly concede that Seymour does not, in fact, know one end of a boat from another, but understandably so perhaps. (I'm obviously no expert, and there's only one relevant photo in the book, but looking at that and at photos of Grand Union butties' back ends, of which I have rather more than might be considered healthy, seems to confirm this.)

There are so many good, nice, things about this book. Seymour has a sense of humour, and frequently gently pokes fun at himself, although rarely at others. His enthusiasm for and enjoyment of boating shines through, despite hardly ever being explicitly stated. His affection for his family is understated, but clear, and we're left wanting to know more (rather than wishing to hear less) about them.

He doesn't patronise the reader with heavy-handed exposition, but throws us in at the deep end; we may not know the meanings of words like yawl, lee, ebb, aegre, but that doesn't matter; more important is their inherent poetry. Seymour's use of language is lovely, and effortless, so even when there is nothing particularly interesting to relate it is still a pleasure to read.

This is the secret water road through the heart of England which winds way back into England's past and will wind forward into her future, for, try as we will, we can't get rid of it. It is the road that supplanted the pack routes, and the road that made possible the Industrial Revolution. The Battle of Waterloo won on the playing fields of Eton? It would be truer to say that it was won by an endless caravan of narrow boats, towed behind their horses, carrying coal to where iron was, limestone to both, and cannon and shot and shell and every manufactured thing to where they were required.

He does, occasionally, labour a point; the desirability of returning transport from road to water (preferably horse drawn), being one, and the wanton destruction of lock cottages another - but who could disagree? (Given that at the time he was writing commercial carrying was still, just about hanging onto life.) He can be ever so slightly precious; 'as part-owner of power station, canals and coalmines* I should like to know more about it.'; 'If the 'No Mooring [sign] was put there by the National Trust I, as a citizen of England, would like to know why,' etc - but there is always the redeeming possibility that these are being said tongue in cheek.

(*Note to younger readers: in 1963 all these resources were, as it was quaintly known, in public ownership.)

The account, in chapter 16, of how he goes to talk to David Hutchings and finds himself waist deep in mud, spending the entire day digging rubble out of a flooded lock alongside a gang of prisoners from Birmingham while his wife is press ganged into operating the crane, probably conveys more about Hutchings than any description could, and there is also, in the next chapter, an interview with Leslie Morton which is detailed and informative, and still entertaining and readable.

Their journey ends via a detour to the Middle Level, and it is salutary to be reminded that only forty-odd years ago many of these waterways were virtually impassable: 'The network of waterways ... was weeded up and silted, and there had been talk of closing it completely to navigation.' There is a marvellous description of the operation of Fen lighters, and this was nice, as I could actually picture the scene:

We took a slightly different route back through the Middle Level; we went to Ramsey, or as near as we could get to it, and I do not think a boat has got as near to Ramsey as that for many a long day. There is a mill at the head of the river, and a turning basin, now all silted-up. You can see where the river used to continue right along the main street, but the people of Ramsey have filled it up and made a car park of it. How foolish can you get! You only have to look at Ramsey to see that it was born to stand along two banks of a lovely river, like a little Dutch town.

Also familiar was the description of the flour mill at Wellingborough, although the 'large municipal garden on the north bank' appears to have lost its 'flowerbeds, a paddling pond, and every delight', now being a rather scrubby patch of grass and concrete separating the canal from Tescos.

Seymour, who died in 2004 aged ninety, (Guardian obit. here) went on to become better known as an environmentalist and campaigner for self sufficiency and low impact living. The attitudes and knowledge that led him to this position are clearly already in place in Voyage into England, but the book is not at all po-faced or hectoring; rather, it is, like Seymour finds boating itself, a great pleasure. It's out of print, of course, but there seem to be plenty of copies to go round on Abebooks and Amazon Marketplace. Go on, put it on your Christmas list.
Posted by S at 9:29 PM

Thanks - that really made me want to read Voyage into England. John Seymour's book on Self-sufficiency was my well-thumbed bible when I was a girl. I loved it.
- Carrie

The mill still stands, as you know Sarah, converted into low cost apartments.
The river also still runs under the 'car park', which is the road called the Great Whyte. If you have a suitable craft (ie a canoe), you can paddle through the arches and under the Whyte.
I haven't done it myself but your near neighbours at Bill Fen, Roger and Maggie (Scipio 3) have.

Have wondered where it comes out - does it join back up to a main waterway?

No it doesn't.
You can't actually canoe all the way through but if you could you'd travel the full length of the Great Whyte, then underneath the High Street (which is the T junction at the top of Great Whyte) and come out in the large stream that runs through Ramsey Golf and Bowls club.
You can see the stream clearly on Google Earth.