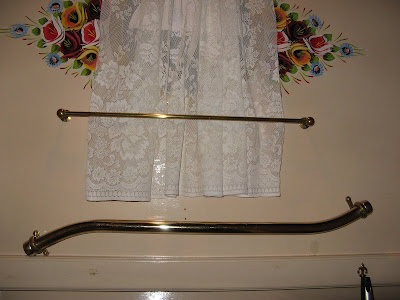 Indeed it is. At the Ellesmere Port Boat Jumble last Easter we spent a long time contentedly browsing the table manned by Malcolm Braine, and came away with (among other things) some lengths of brass step edging (some of which now graces our engine room hatches); two lovely mysterious bits of brass, probably from fire irons, one of which became Warrior's tiller pin (and the other a spare), some lovely brass screw-in eyelets in various sizes (not yet allocated a task) and four beautiful, heavy, shaped brass handrails, long since removed from a boat.

Three of the handrails ware complete with brackets (well, that's the nearest term I can think of to describe them but they're not exactly brackets really). These had one screwhole in the back of them, so would have needed to be bolted through from behind. However, Jim attached them to some drilled steel plates so they can be screwed to surfaces more conventionally. One of these has become the rail above the stove in the back cabin, where it looks brilliant, and the dog-leg kicks perfectly around the table cupboard. The other two will probably be fixed to the ceiling beneath the engine room roof hatch - partly for a bit of security, but also because it should look really nice, and will be useful for hanging things from to dry.

The fourth rail had one of its ends broken, so we gritted our teeth and broke the other one off too, just leaving the end cap, and fixed it up using big brass pipe clips. Voila, one fantastic, and distinctively curvy, brass towel rail. I love finding new uses for old objects like this.
Posted by S at 8:56 PM

Hi Sarah.
That is absolutely beautiful. Like you I love finding new uses for old things. You really had a great find.
I am looking for a brass rail for our boatmans cabin to go above the stove, and I know one will pop up some day. it is all about being in the right place at the right time.
Enjoy the rest of your week.
Kind regards.
Jo

The roses look good Sarah, what we can see of them in this shot. Care to show us some more some time?

Red Dragon Man said...
This comment has been removed by the author.
4:55 PM

Yes, I'll do a post about them soon. (Starts digging through photos)...

Good quality bathroom accessories can also be purchased from the below links.