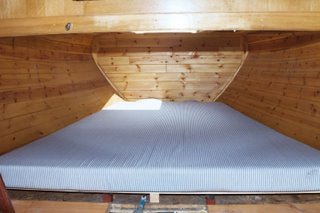 Tuesday July 11th
It has fallen to me to do the blacking - mainly because I lack the myriad other skills which Jim is deploying elsewhere on Warrior. Not that blacking isn't a skilled job! (Well, no, it isn't really.) In our absence, Warrior's hull was shotblasted and two coats of blacking put on; my aim this week was to add a further three, making a total of five coats. We are using Rylard Coflex vinyl tar (comastic) and are taking it right up to the gunwale for ease of future patching up. I'm putting it on with cheap (£1.29) bristle brushes and chucking them away at the end of each coat - actually, despite being cheap they shed far less hair than most brushes I've used. I've always preferred brushes to rollers; it may be slower but it's less messy and it goes on thicker and better. This stuff went on very nicely (and the finish is authentically rough with plenty of runs and brushmarks!).

I did the third coat on the Monday, half of the fourth on the Tuesday and the other half on Wednesday, and the fifth on Friday - Thursday was a day off because a boat was being gritblasted nearby. The only bit not done is the fore end - owing to a large and apparently growing pile of gravel having been delivered around it, which provides a lovely effect of Warrior ploughing through the waves but impedes painting access. Rather than move the gravel, Keith is going to move Warrior at some point, and then we (or they) will get the last bit finished off.

The tin the stuff comes in is of course emblazened with myriad warnings to the effect of how nasty it is, and I was careful not to inhale too much of it - but I was still surprised to find that - at least in combination with the sun - it will burn skin where it drips on it. I first noticed this with a mysterious sore elbow on Monday evening which then developed burn marks; I suffered no ill effects on the Tuesday or Wednesday, but on Friday nearly every drip was leaving a mark and I finally sussed out the cause. Whether the difference was in the different tins, the temperature or the sunlight I don't know. But it's obviously good stuff!

Other tasks today included Jim building the base for the bed under the foredeck. This is as close to the floor as possible, to give us maximum headroom, but raised up enough to provide some airflow to the mattress and clear a water pipe. Originally, there was a very ingenious and well built roll out bed, but it had several disadvantages: it was narrow (3'9"); the head sloped downwards, and we had to move the furniture to make space to roll it out. Having a fixed bed under there means the bed can be wider - about 4' at the head end widening to the full width of the boat, and the head end slopes (slightly) upwards rather than downwards, making it much more comfortable. We thought of levelling it out but that would have lost us more headroom. As it is we have about two foot, which is cosy but adequate for getting in and out. The whole space under the foredeck is panelled in pine and beautifully finished - even though it was never intended to be seen. There is a large hatch over the centre of the bed that we can prop open for ventilation - before the wasp season starts I have to make an insect screen for it! We had a mattress made in 4.5 inch thick foam, covered in striped ticking, by the Foam and Fabric Shop in Seaford, East Sussex - I think it cost £270, and it's very comfortable and shaped to fit in both dimensions.

Finally, on Tuesday, we went out for dinner to the Hartley Arms in Wheaton Aston, which was pretty good; certainly much better than our other attempt at eating out in the area, at the Vaughan Arms, Lapley - definitely not recommended! After a nice meal and some very good beer we went for a walk along the towpath where we saw a lovely new boat and engaged the owner in conversation - he turned out be to a repairer of boat engines, specialising in old ones, and we may hear more of him here ...
Posted by S at 9:57 AM

Hi, how are you getting on with the under deck bed?

I've just bought a '53 tug style narrowboat and am thinking of doing the same thing.....

Hi
Couldn't find any other way to get back to you so I hope you see this. It works for us; we have just enough headroom - about two foot. Our heads are towards the fore end. Jim crawls in forwards and out backwards; I do a little sort of rolling turn and come out forwards. Getting in and out is the fiddliest part. Once in it's very nice and cosy, and there's plenty of room to spread out sideways. A local upholsterer should be able to make you a foam mattress cheaper than a specialist boat supplier - we gave outs detailed measurements, including the angle between the base and sides, and they did a lovely job. The ventilation is probably quite important - I imagine it would get quite stuffy otherwise. We have a hatch that was already there but you could perhaps use mushroom vents or, if you were worried about water getting in in locks etc, it might be possible to get special deck vents - I think I've seen them. The advantages of doing it this way certainly outweigh any inconveniences. It uses otherwise wasted space - if you use it for storage you still have to crawl in and out and are unlikely to use the whole length. We still use the space for storage in a way anyway - we store most of our clothes in big bags (one each) which we chuck on the bed during the day, hidden behind the curtain, then we just chuck them out into the saloon at night. It gives you the best sized bed you are ever going to get on a narrowboat. It's ready to crawl into without any setting up, and in the morning you can just crawl out and shut the curtains on it. It doesn't take up any space or cause any disruption in the saloon or anywhere else. The only caveat really is the amount of headroom you have available and whether you have any tendency to claustrophobia. If you can, try setting something up temporarily and see how you get on with it.

The base was quite straightforward to build. You could maybe put a mattress straight on the floor but we put the base in for three reasons, firstly to allow some air flow round the mattress, because everyone says you should, second, because there is a water pipe running straight down the middle from the tank to the pump, and lastly because there were some sharp steel stumps where we had cut out the old roll out bed. We just put strips of 2x1 batten round the sides and a piece down the middle, raising it 2" off the floor, and went across with 6 x 3/4 cheap pine planks from Wickes leaving about a 1" gap between. We measured and cut them with angled ends to fit fairly flush to the sides of the boat and screwed them in place with drywall screws, which didn't need predrilling. It It took Jim a morning to do, with me passing him things! There's a picture of the base without the mattress, and of the building process, on the photo site http://community.webshots.com/user/nbwarrior in the album 'Working on Warrior'. I know of one other boat with the bed under the deck, and they are very happy with it too. Good luck - let us know what you decide and how you get on!

Hi
In addition to what Sarah has just posted it is clearly a very good thing...... and also the fore end curves upwards towards the front so that it is very much higher at the head end. I am fairly large (16st 9lbs) and about 5'11" and I am very comfortable and despite not being in the first flush of youth(!) find getting in and out very easy, much easier in fact than getting in and out of a conventional bed in our other nb. What really was the desider was the fact that despite the fact that it would never be seen the builder had panelled it out beautifully with old pine and mouldings. I have been up to the boat twice during the recent heatwave,it is at Keith Ball's yard Stretton Wharf, on the Shroppie, and it is the coolest place on the boat. If you want any help at all please contact us.

Thanks very much for taking the time to reply! I'll essentially be doing what you suggest, which is just get the space ready and try it. No idea whether I'll find it cramped or not until I do.

Here is a link to the discussion thread, where I found the link to your blog.