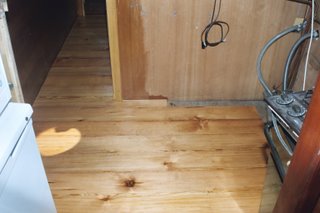 While we were at Stretton a few weeks ago, one of the things we did was to lay a new floor through Warrior, as far as the engine room. Previously there was carpet, laid on top of more carpet, laid on board. The bottom layer of carpet was very firmly glued down! We were pretty sure that we wanted a wooden floor, and I was keen to have the planks going full length across the boat, which meant we needed six foot lengths, which ruled out most flooring available in the shops. Our first preference was for douglas fir, but that turned out to be prohibitively, unbelievably, expensive. In fact, new timber of all kinds, as well as all but the cheapest laminate, was more expensive than what we ended up with: 200 year old pitch pine, sawn into six-inch-wide tongued and grooved boards, from reclaimed laminated roof beams. It took Jim two days to lay the floor, using hidden nails through drilled holes, and then we practically lived outside for the rest of the week while six coats of boiled linseed oil soaked into it. We decided on linseed oil because it's cheap and natural and the least noxious option. We use it on our pine floors at home and they've been fine. I fully expect the floor to pick up some knocks and dirt, which we can live with, but we'll protect it from the worst while cruising with some rubber-backed absorbent cotton mats we bought for 50p each in B&Q in Huddersfield. (Too much information yet?) The pine floor goes through the saloon and the kitchen; in the bathroom we will have some heavy duty vinyl which I got out of a skip; hardwood decking boards in the engine room, and red oxide paint in the back cabin.

On Sunday we're back off to Stretton, where we will be mostly painting - more coats of blacking on the hull, priming and undercoating in the engine room - and putting up the curtains which I have spent today making.
Posted by S at 8:18 PM