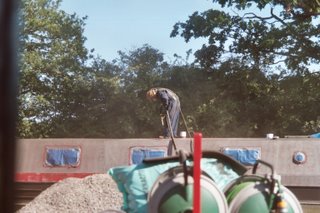 We did very little work on Warrior on Thursday, as another boat was being gritblasted. We were warned to batten down the hatches against the ensuing dust, but it wasn't too bad. We put our clear plastic sheets in the front doors and the kitchen side hatch, but the back end of the boat wasn't too affected. In fact, in the kitchen it wasn't the dust that was the problem so much as the exhaust from his enormous compressor which was lined up right alongside. Running almost continuously for what seemed like all day, this had the inestimable benefit of drowning out the sound of Radio 1 (yes, I really have got a downer on them; I honestly would rather listen to a compressor all day. More musical, too).

Well, it was very impressive to watch - and looked like an absolutely horrible job, especially on a day as hot as this was. We had (briefly) considered having Warrior's topsides (too naval?) blasted as we had the hull, but watching this decided us against it - on top of the cost (every penny well earned, mind you) there is also the hassle of masking eveything properly, and clearing up afterwards - and Warrior's paint, though horrible, is sound. So it's back to plan A, much sanding. Enter Number One Son, Lockboy's older brother, who owes us a favour or two ... He's not mad about boats, but he does like power tools, so we have high hopes of his assistance.

Other things I did while confined to quarters included putting the bed curtains up - that's a curtain on a rail either side of the steps and a flat panel in the middle, attached to the back of the steps, and I'm quite pleased with them even if I do say so myself. I also varnished the insides of the kitchen cupboards. Oh yes, and I sat out on the back and read the paper quite a lot.

Two other boats arrived and were craned out in the evening - a couple with a boat each. One of the boats, at eighteen months old, was an object lesson in the importance of removing millscale - the blacking was just falling off the hull.

I'm all alone in the office today, the kid that couldn't go on the school trip - everyone else is off on a departmental 'awayday'. The fact that I'm only here for another three weeks seemed like the perfect excuse to give it a miss. In case you're worried that I'm missing out on an all-expenses-paid treat to some exotic location, they've gone to Oldham.
Posted by S at 10:12 AM