No fire without smoke? 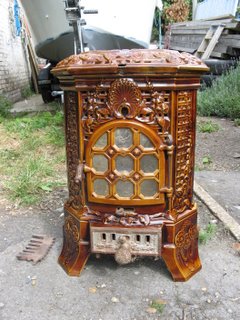 This is the stove we were hoping to install in Warrior. The Morso Squirrel which was already installed, despite having nice new glass in the door, was in a parlous state. Given that it was a maximum of ten years old and that they aren't cheap, this was rather disappointing, not to say shocking. But it appears that it had been abused somewhat, being used very hot with no or inadequate firebricks in, and with water running down the stovepipe for some time, it's little wonder that the iron at the back was very badly burnt away with actual holes at the top. So that's off to the tip.

The 'new' stove is an old French one that I fell in love with many years ago in an antiques shop in Lewes, East Sussex. Round here it's quite common for antique dealers to go to France for attractively rustic artefacts and lovely enamel things like this. For years it sat in our kitchen, with us constantly meaning to get around to plumbing it in, but then last winter we got a cast iron range and fitted that instead, leaving the French stove homeless. One of the main handicaps with is is that it's a non standard size for British pipes and fittings. The other was that we didn't know whether it actually works.

So this morning we hauled it outside and lit some paper and wood in it to see where the smoke went and whether it had any serious leaks. Depressingly, it looks like it might have. I know it's not really a fair test, because it's not going to draw properly outside without a chimney (although we actually managed to rig up quite a good temporary chimney with a bit of liner left over from the kitchen range and part of a traffic cone). Even allowing for the fact that it needs new sealing stringy stuff (whatever that's called) in the top and the door, and new mica, probably, in the door (and where do you get that?), there were still mysterious wisps coming out around the top. It's hard to see where they were coming from because of the stove's double-skinned nature; it could be swirling around anywhere between the firebox and the enamel cover. I cling to the hope that it's coming out of the door then being sucked back behind th enamel to emerge from the top. We don't want to spend any money on getting a new pipe and fittings made if it's not going to get past Ian with his BSS hat on. But I really don't want to give up on it. It's the sort of dilemma that seems to happen a lot in this game.
Posted by S at 9:18 AM

Had I the luck to pick that up before I designed the Milly M I think I would have had a whole different boat. I hope it works for you.

Looks a little like the Godin stoves imported by Lawton Imports.

They're gorgeous aren't they? I saw something similar on the Hudson boat at Crick, but it only had enamel top and front, plain black (didn't even look cast) sides. I don't know if that was one of the Godin ones.

I too are a fan of these French stoves, I have a round one and it works perfectly although I did have the same concerns as you. Use high temp silicone to seal any gaps that whisps of smoke come out of

Pictures of mine in the Nov 2005 update

Yes, lovely - and a beautiful boat too Charles, I've meant to say so for some time. Thanks for the tip - will get some!