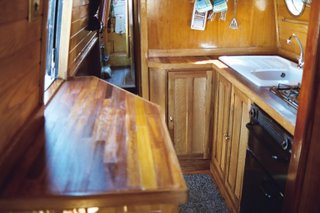 And AFTER! More photos here.

Monday July 10th
We were awoken on Monday morning (as indeed on every other morning) by the arrival of a welder, at 5.45! As he didn't realise we were there, he put Radio 1 on immediately (the rest of the week he waited until he knew we were up - we always were, but it was a challenge to see how long we could keep quiet enough to stop it going on). In best holiday fashion, I have come home with a couple of mindless songs stuck forever in my head.

The first thing we did this morning was to look at our new kitchen. It is magnificent! And it was a total surprise - when we rang Keith to say we were coming he didn't say a word about it, and we were fully expecting to find the empty space we'd left. Looking from the front of the boat, to the left is the fridge, with a full depth worktop over it, which then tapers over about 600mm to about eight inches deep. Under here is a cupboard with double doors on the angle, and the side hatch is accessible above it. On the right is the cooker with inset hob (we reused the old one), then a white china sink with integral drainer which we bought from the local tip years ago (£3, I think) and have finally found a good home for. This has cupboards below as well, and facing you at right angles to this is a worktop about a foot deep with another cupboard below. It's a very efficient and attractive layout. All will become clearer when the photos arrive.

The worktops are iroko, a combination of worktop offcuts and timber offcuts which we found, and the cupboard doors are quarter sawn English oak, supplied by Derek, the brilliant cabinet maker who built and fitted the kitchen. The trim is ash, which we specified to tie it in with the rest of the boat. The ash trim and the insides of the cupboards have been varnished; the oak and the worktops oiled.

In the afternoon we went to see Phil Speight of Craftmaster paints (and Canals and Rivers) fame to talk about paint and painting. We came away with some light grey paint for the engine room woodwork, and having ordered raddle red engine enamel for the engine bay. We also asked him about National engine green, and he suggested that Mason's 'dove green' is about the nearest. This does look very similar to a stationary engine we saw online which was claimed to have original paint, although it was darker than Tony Redshaw was suggesting, with a sort of silvery tinge. On the way back we stopped at Wickes in Wolverhampton (God, we see some glamorous places) to buy wood for building our bed ...
Posted by S at 2:23 PM