What I did on my holidays 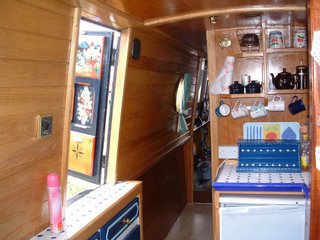 Warrior's kitchen BEFORE! (This picture does not fully convey the horror ...)

A week under the baking sun, yards from the water's edge, hot black sand between my toes ... no, of course I wasn't in Tenerife! I was in a boatyard on the Shroppie, a much more desirable holiday destination. I still managed to acquire some impressive insect bites, plus some small but interesting chemical burns, and all without even needing my passport (which I have just renewed, after a lapse of over ten years, in order to avoid being put on the national identity database for as long as humanly possible - see the NO2ID link for details of that - it's the one link that works).

It's a funny thing, living and working on Warrior in the yard - it's a bit like setting up camp in somebody's factory, or building site. It makes me feel rather intrusive, and as if I might be getting in the way - but it's also very hard to resist watching and listening to the people working there, because it's so fascinating and instructive. Blokes, I've noticed, seem to suffer no such qualms - within minutes of arriving they're marching round like they own the place and chatting away as if they've known each other for years.

I'm very envious of that insouciant sense of entitlement; a few women (rich and particularly upper class ones) have it, but nearly all men seem to. I think this is related to the question that was raised in the press the other week about why so (relatively) few blogs, particularly political ones, are by women - one answer was that men just assume that the world is interested in their opinions, while women set the bar a lot higher in judging what they have to offer before they say anything.

Back to Warrior - we arrived last Sunday evening, just as it was getting dark, and my plan for this week is to put a daily diary up here of what we did last week - I've been making notes in the log. Photos will follow with the usual time lapse - but as the first thing we noticed on arriving was Warrior's new kitchen, just to be going on with, above is a picture of the old one. This photo does not actually do justice to its awfulness, which, as it was taken by the previous owner, is not really surprising - the trim was plastic and falling off, the tiles were very crudely stuck on top of curved-edge worktop and also falling off, and there was very little worktop space. Without altering the overall size of the kitchen, and utilising the existing fridge and cooker, we now have a layout that gives us significantly more workspace and cupboard space - more details tomorrow!
Posted by S at 12:11 PM