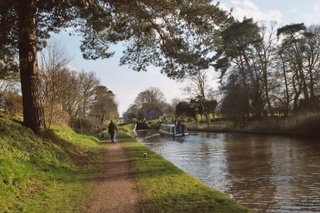 I got back yesterday from sweltering in Nottingham where for once I was quite glad of an air conditioned conference centre (though I would rather have been on a boat). I've just finished uploading the first tranche of photos to Warrior's Webshots site, and it seems to work quite well as far as I can tell so far.

The photos were all taken with my trusty Practika BX20, which I bought as a teenager in the early eighties. If I remember rightly, it cost £200, including the flash unit and two zoom lenses (35-70 and 70-210mm) and is still all going strong, although the flash unit's attaching bit has been repaired with superglue, and the rewinding handle broke off at Braunston. The only other breakage occurred while Baz (aka Lockboy, but not for much longer) was carrying the camera while out on a walk and tripped over his shoelaces, landing on and breaking the 35-70 lens. Fortunately Jim was able to find a second hand replacement, although I've never found out what it cost. So don't walk round with your shoelaces undone! (Especially on a boat.) It's a big, heavy, aperture priority SLR and I'm very fond of it, although I suppose I will have to enter the digital age sooner or later - perhaps when they stop making film. Most of the photos were taken on bog standard 200 ASA Kodak film and developed and printed by Messrs Bonusprint; the last few lots I've also had put on CD in order to be able to upload them. The photos on the site are a selection from eight sets of 36, which is why it's taken a while.

You might notice that before I went to Nottingham, Baz and I tried with only limited success to establish a links list for this blog. As soon as we work out how to do it successfully, the photos will be top of the list.

Engine update: Cheryl from Russell Newbery rang while I was away to say that the crankshaft has gone to Guildford for its x-ray - fingers crossed!
Posted by S at 1:35 PM