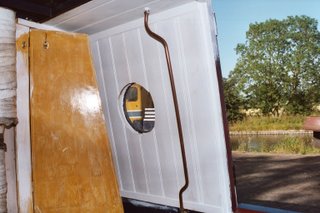 What I actually did on Wednesday was more blacking. What I am going to write about, however, is the panelling out of the engine room, which has been going on since our last visit, and is still underway.

For some reason, the engine room was never lined. This meant that it was cold and prone to condensation in the winter and an absolute oven in the summer. We are lining the cabin sides (vertically) with reclaimed old beaded edge pine t&g the ceiling, in the same material, will be a little trickier, as the roof has a removable section for getting the engine in and out. Jim is currently working on it and it will probably end up with the middle section being a removeable panel, larger than the hatch, which screws on to the surrounding woodwork. We are using polystyrene for insulation behind the panelling. The porthole will now need a liner, but we won't be getting a brass one to match the rest of the boat; rather, we will have one made from steel and paint it.

The painting will be in pale grey for the woodwork (by and large everything above the gunwale) and raddle red on the metal, including the hull sides and engine bay. The Craftmaster paint is justifying its cost by being a pleasure to put on and covering very well.

Not one of my more scintillating posts, granted, but it's late afternoon in sweltering Huddersfield and I just want to get out of my airless office and go and swelter on Andante instead. Remember, when it's too hot to work, it's not the heat that's the problem!
Posted by S at 3:07 PM