Back to reality (well, it's all relative) 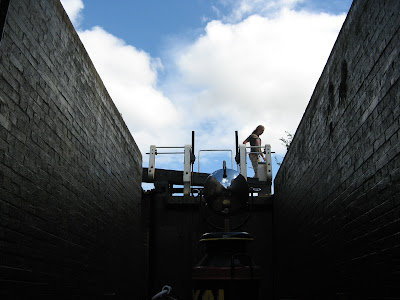 We did not wake up very early this morning. Certainly not early enough to accompany the Alnwicks, Bones and Maffi to church, even if we had been so inclined (and they did make it sound like fun, but I have my principles). Baz showed everyone his new acquisition, on which he could already play some scales and a slow version of Kumbaya, and improvise very impressively. The accordion sounds great and seems very versatile. Then we said goodbye to Graham and Jane, our hosts, as it were, and to Maffi and Bones, our newest friends, and untied Warrior and set off after five strange and wonderful days in Cropredy.

I like the a lot. Except for Banbury. Banbury, where we stopped for water, is horrible. Apparently it’s always had a rough reputation, but has been smoothed off in the most soulless, soul-destroying way, architecturally speaking. The legendary Tooleys yard appears to have been encased in some sort of glass edifice (give me a Charity Dock any day); I admit we didn’t investigate closely, because we wanted to get away as quickly as possible. Our water finally ran out en route – how’s that for timing – so lasted six full days of reasonable, if careful, usage, which is good to know.

The rest of the journey today has been very pleasant, with the sun shining (eventually) and Baz improvising away on the foredeck. Some of the locks are quite hard work, and the towpath is very overgrown, but that all adds to the charm. Rather than going on into Aynho tonight, with its pubs and no doubt exciting nightlife, we felt like a bit of quiet and middle of nowhere for a contrast to the hectic last few days, so are tied up in a jungle below Aynho Weir lock, opposite a field of cows.

One of our piling stakes got dropped in in the process, but was eventually recovered using the keb and the cabin shaft. Jim has asked for a magnet for his birthday, and I can see one would be useful. The other stake got bent (but it still works) when a passing large Woolwich, Chiswick, (another one to tick off my list, though I didn’t atke a photo) nearly pulled it out. It dropped back in again, but was bent in the process. I still think they’re very impressive though, and easy to use.

speak to magnet man about magnets - he has a fantastic one for sale.

What could be better than a Sea Searcher?