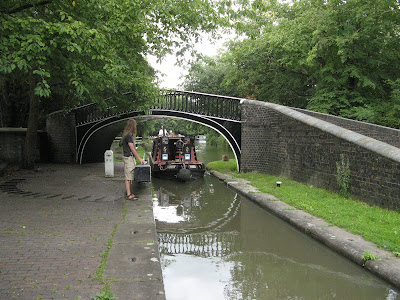 Dat 14, Shipton on Cherwell to Eynsham Lock, via Isis Lock

The weather really is not being kind to us this trip. I mean, it never is; the last three Augusts I have been boating, and it has rained more than not every year. But lately it has been particularly malevolent, teasing us with a little sunshine, then battering us with hailstorms. It really lashed down last night - I suppose I should be graeteful it saved it until after Cropredy. Then this morning dawned fair and lovely, and after a very brief sightseeing foray into the village we left Shipton at half past ten. We seem to be getting quite bad at getting up in the mornings, but I suppose that's what holidays are about. We got water at Thrupp, where we also collected some new books and left some of our read ones behind, along with a donation to the local hospice. 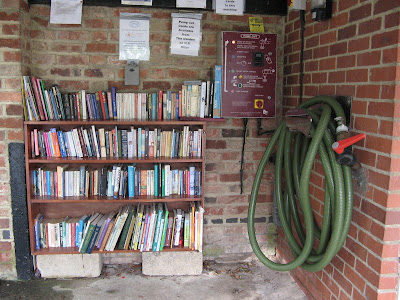 There must be a reading in the toilet joke here somewhere

It's a brilliant idea to have book-swapping points around the system, and I hope there will be more. There were some at the Brasenose, but I never investigated. We chugged blythely past the Dukes Cut - a short, ahem, cut to the Thames, because I wanted to go further towards Oxford - not all the way in like Amy and James have (although perhaps we should, as we have plenty of time to spare; as long as the Thames behaves, that is). I was glad we did; saw a lovely selection of hippy boats (and I'm not being sarky, I really do like to see them. I wish I could live like that but I have learned to live with my compulsive tidiness); saw some interesting boats, including Banbury and the blue top prototype Beryl. Just before the lock was the endlessly chronicled Castle Mill Boatyard, of which sadly there was very little to see. What was in evidence was a lot of new building, of which we are presumably to expect more of the same, of the grim-as-fuck school of architecture. It might have been horrible, sinister and sordid before (I've read my Morse) but that's no excuse for making it horrible, bland and soulless instead. It was, quite literally, repellent, some of the developments even having tall fences to isolate them from the canal.

Nonetheless, it was with great sadness (well, on my part anyway) that we passed through Isis Lock onto the Sheepwash Channel and thus on to the Thames. What a contrast; as if to shock the unwary newcomer, the river is particularly wide and windswept at this point. It felt like being at sea, so soon after the cosy narrowness of the Oxford. 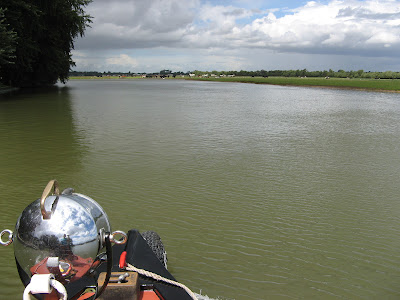 At Godstow, our first Thames lock since Helyn days, the lock keeper was at lunch, so couldn't sell us a licence (although his colleague locked us through). I'd phoned in advance to check that they took card payment, and he said they did, though not all locks did. However, we were told that they also did at the next lock, Kings. When we got there, the skies opened again, and we all got soaked. As soon as we were through, it stopped. We got our fifteen day licence (£98.50) and made our way to the next lock, Eynsham. We'd been told that this would be the best place to find a shop, and there was a twenty four hour mooring available, so Baz and I set off into the ominous thunderclouds.

It was about a twenty minute walk, to, I think, Swinford rather than Eynsham itself, across a charming toll bridge at which a man sits to collect tolls of 5p from cars, rising to 20p for double decker buses and 10p per axle for lorries. How come there are all these things going on in the country and I've never heard of them? As we walked up the road, the lightening and thunder grew closer and closer together, and soon we were engulfed in the most violent hailstorm, and soaked to the skin once more. This is fun, isn't it, we said to each other. I have a sneaking suspicion that this might be the last time Baz comes on holiday with us. Anyway, wherever it was it had a Co-op, which was a blessed sight as we haven't had any bread for three days and were eating savoury rice for lunch.

Getting back to the boat, we decided to stay here, as we were already tied up, making this our shortest day's travelling yet, at four and a half hours. Still, we don't have to be at Lechlade until Friday, so it will be nice to take it slowly and stop off and explore places a bit more often, rather than just getting from A to B. So we've lit the fire again to get everything dried out, and may eat out tonight.
Posted by S at 4:32 PM

You went past the boatyard at Jericho only a few hours after a report on it on Today. Philip Pullman was interviewed.