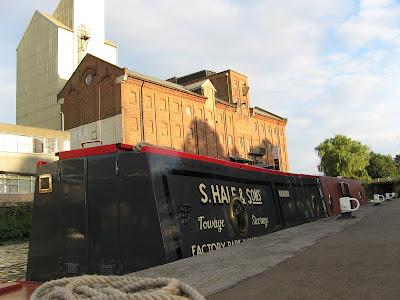 Amazing things, muscles. Given that for eleven months of the year I don't lift anything heavier than a book; turn anything more onerous than a nice phrase, or push anything more resistant than a disciplinary boundary, and have never visited a gym in my life (well, I tell a lie, I did once visit one but one look at the equipment was sufficient to convince me that this was was somewhere that I very much did not want to be), come holiday time they leap into service and do all sorts of demanding things that surprise even me. Locks mostly. What a splendid all-round workout (I believe that's the correct word?) they provide. Imagine how frighteningly fit I'd be if I did this all year instead of sitting on my arse for eleven twelfths of it.

Today we polished off a further fourteen locks, leaving thirteen for tomorrow which will take us to Northampton. I know that objectively the Nene is very nice, but it just doesn't do it for me. It's all relative though; I'd still rather be boating almost anywhere than doing almost anything else. The engine is still behaving impeccably and running steadily at 70. Tonight we are back in Wellingborough. For the last two nights we have been lulled to sleep by the sound of water rushing through/over/round a lock; tonight we have the A509 and the Whitworths flour mill.

It's not the nicest spot in the country, but it provides some welcome historical interest; we're just across the river from where the Grand Union boats would have unloaded imported grain brought from London.

Thanks to everyone who's commenting by the way - keep them coming!
Posted by S at 7:27 PM