Break out the nylon trousers 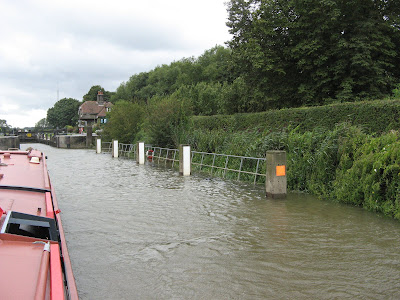 that's the landing stage under water; apparently it was even higher earlier in the day

Last night we went to the Talbot at Eynsham. It didn’t look much from the outside, but it was splendid; Arkells beers straight from the barrel, friendly staff and very good food.

It may then have been overindulgence that led to my having a rather restless night, involving dreaming of, inter alia, a particularly annoying cat coming back from the dead; bits of the boat I hadn’t formerly known existed (that happens a lot to me in dreams) filling up with water, and Jim having to go shopping rather than bringing the boat out of a lock because of a toothache which, in the opinion of the lock keeper, made him unfit to drive. On the other hand, it might have been the relentless rain, the rushing of the weir, and the slap of the water against the hull at ear level.

Whatever the cause, I awoke feeling not particularly rested, rather testing my resolve to get to grips with the river and learn to appreciate it by engaging with it rather than just watching it go by. To do a bit of steering, in other words. This resolve, such as it was, was tested further – and ultimately steeled – by the lock keeper coming on duty and immediately putting out yellow boards; hardly surprising in the light of all the rain we’ve (ahem) been having. We toyed with the idea of staying put, but sought, as one always should, the advice of the lock keeper.

He said that on the contrary, we should make a dash for Lechlade before it got any worse, suggesting that red boards might be out within a couple of days. Anyway, with it only on yellow, there was no way he was going to let us overstay on his 24 hour mooring, oh no. Having planned to take two days meandering leisurelyly (?) to Lechlade, we’d been mooching about not very urgently, gathering our strength (me) and going shopping (Jim), and also needed a pumpout, so didn’t leave until quarter to twelve. It’s quite disgraceful; we’re getting later by the day.

I maintained my resolve to steer despite Jim being quite vocally dubious about my abilities in that direction, and got off to a relatively good start, negotiating the weirstream (which had looked terrifying when we watched other boats going through earlier), lining up and stopping in the lock quite nicely. Obviously a fluke! Although there were no disasters, things didn’t go quite so smoothly at the next lock, where I, smoothly and oh-so-gently, parted the boat in front from the landing stage by the simple expedient of remaining in neutral whilst being convinced that I was in reverse. I had a small rope-throwing triumph, lassooing a bollard, ooh, all of eight feet away, further down the line which restored my faith slightly.

Best of all though was the actual steering. You do get a different perspective when you’re part of the action and not just an observer, interacting with the boat and the river. I don’t have much experience to compare it with, but I suppose it was quite challenging conditions: strongish stream and very windy, on a winding river. It was certainly physically hard work, but exhilarating, especially taking the bends; it really felt like working with the boat rather than controlling it.

I enjoyed it most out there on my own – even though this was mostly when it was raining. Today’s rare bouts of sunshine were interspersed with very heavy showers, often accompanied by driving wind, but at least it meant I got to wear my hat. For some reason I haven’t yet fathomed, the hat worked better when steering left handed. I’m working on that. The heavens also opened, I kid you not, every time (bar one) that we got to a lock. Is there something about locks on the that attracts rain clouds to hover over them? And about us that makes them discharge their watery arsenal? Today was notable for the sight of a variety of lock keepers running for their waterproofs. Aching shoulders drove me to hand over the tiller after three hours, but I can feel them getting stronger already.

We didn’t make it to Lechlade tonight; we’ve stopped at . Tomorrow, hopefully, we will proceed as far as Inglesham, before coming back to Lechlade, where we will pitch camp until Saturday. I am hopeful that there will be improving activities to be had in the town, although disappointed that William Morris’s house at Kelmerscote is only open on Wednesdays.
.

Well done on the steering! It is so satisfying when it all goes right and when it doesn't well, its all a learning experience. I let James do the boat handling on the Thames through the red (!) and yellow boards though.

And the Red House is certainly worth a visit when you can - it is wonderful!

oh! reading more closely I see you that (of course) you didn't mean the Red House (Morris's other house)at all. it is still wonderful though, but it's not in Kelmerscot.