You can keep your tumble driers... 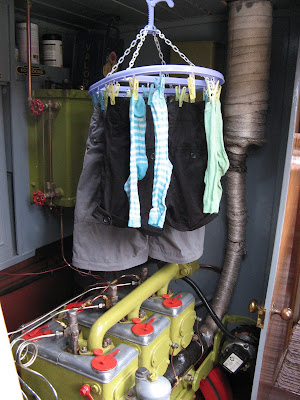 Thought you might appreciate an update on how the apparel recycling is going. Without being too indelicate, I can report that only three sets/pairs (and yes, that is with clean ones every day, thank you) of anything have been used by me so far, so perhaps I could have saved even more packing space. Also I have been washing my tops and today I got ambitious and washed my shorts… and by this evening, they were dry, thanks to the patent National clothes dryer. It’s not as efficient as it was, of course (and you can no longer make tea with water out of the tap) but that’s a small price to pay for the engine not blowing up.

Today we set off a bit later, as we’d decided to take it a bit easy (all relative as it turned out) and I got some more brass done this morning. It was slow getting up Napton with queues of two or three, and we stopped at Fenny Compton at quarter to seven. And guess what – went out for more chips, at the Wharf Inn, which was pretty good.

So not much exciting happened, again, today. There was a cow in the canal at one point, which caused us some consternation, feeling we should do something but having no idea what, but it got itself out as we watched, finding the shallow bank. It was quite touching to see the concern of its bovine comanions/relatives, who looked as if they were encouraging it out.

So, Cropredy tomorrow and a chance to relax and do absolutely nothing. Not sure how we’ll cope with that.

You still have to find a mooring, I wait for the next instalment

You're not hanging about!

I hope that washing didn't drip. People have been locked up for such heresy