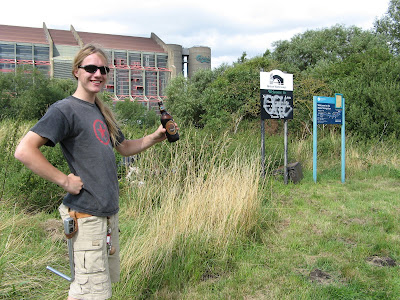 Today did not start very promisingly, with that heavy drizzle that soaks you through before you even know it. We reversed all the way up to the water point at Wellingborough to find that our short hose didn’t quite reach. There followed much scrabbling around under the floor looking for the long hose, which we hardly ever use – long hoses are such a pain to handle and store – before reluctantly concluding that it had been left at home. So I set off across the park for a third trip to the 24-hour Tesco… Will they sell hoses, Jim asked? They sell everything, I jauntily replied. Well, up until last week, it seems, they sold hoses, but gardening accoutrements have now been supplanted by schoolwear, so I came back empty handed.

So we set off in the wet wet rain to do battle with thirteen more Nene locks, and in my hurry to shut the slippery front hatches against the rain, I managed to shut some of my fingers in them, which was very painful. After a while it resolved itself into just two fingers that were actually hurting, and now it’s only one, my left little finger, that is noticeably bruised. This makes an interesting addition to the bruises I obtained in my unsuccessful attempts to be hauled out of the Old River Nene on Wednesday (before I worked out the trick) and some bites from insects which you certainly don’t come across on the south coast, and I have augmented these blemishes this evening with some nettle stings to the legs in the course of tying up just beyond Gayton Junction.

A man at Wollaston Lock told us that the rain would stop at dinnertime (Baz and I debated at some length whether this referred to the midday or evening meal), and sure enough, as soon as we finished our lunchtime sandwiches, it did emerge, albeit not permanently. With the end in sight, we polished off the remainder of the Nene by 3.15, and as we turned onto the Northampton Arm, the sun came out properly, and stayed out until we arrived at Gayton Junction, three hours, twenty minutes and another seventeen locks (lovely neat little narrow ones) later. Yep, that’s thirty locks altogether today, and I had a hand in every one of them (no, not literally), as in the twenty five of the previous three days. So we are now quite well ahead of schedule, which is a good feeling, and the engine is still running well. And we got some water at Gayton Junction.