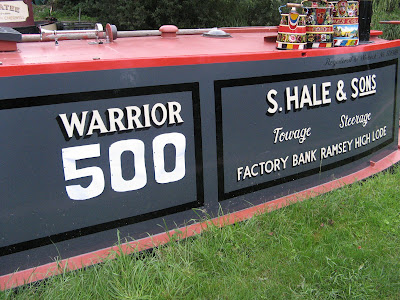 Imagine. Five hundred posts since April 2006. Many of them different.

A relatively uneventful day today. We did slightly ram another boat, but only very gently; we visited the unspeakably sweet floating farm shop (the shop was floating, that is, not the farm); we met a little dog called Arthur who could not possibly have been called anything else, and saw probably the most beautiful new boat (as opposed to Old Boat) I have ever seen. I am in love. 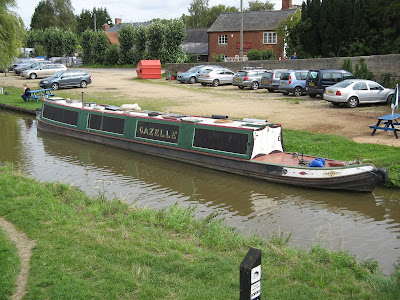 What is more, I correctly guessed its builder to be Ian Kemp (Jim checked with the man at the wharf).

We traversed two weir locks (am I right in thinking that their unusual wide shape is to maintain some consistency of water volume with the deeper locks?) and Somerton Deep Lock (which didn’t look very deep compared to some on the , but mercifully didn’t have leaky sides like many of them. I have looked into, although not boated through, Tuell Lane Lock in , which is the deepest lock in the country and has the grumpiest lock keeper. Allegedly). It mostly didn’t rain, but didn’t sun either.

Last night I caught up with reading the doings of Lucky Duck. You must read it. It is so well written and entertaining; puts my recent drunken and exhausted efforts to shame, and I’m not only saying that because they were complimentary about Warrior.

According to Canalplan we are supposed to turn off down the Dukes Cut tomorrow and onto the Thames that way, but I don't want to miss out on going into Oxford, so we might take the longer route.

Not sure which way you are going on the Thames, I gusse up stream. Last time we came from Beale Park to the Oxford canal with friends, they came through Oxford we continued to Dukes Cut and we both arrived at Duke Cut Lock together.

You're just behind us at the moment- we had a lazy day in Banbury after leaving you (it is soulless!) and we're currently right at the end of the Oxford, below Isis Lock; we're staying 'til the day after tomorrow, so you'll probably overtake us tomorrow.

James is looking forwards to reversing out of this arm....