At long last (in more ways than one) 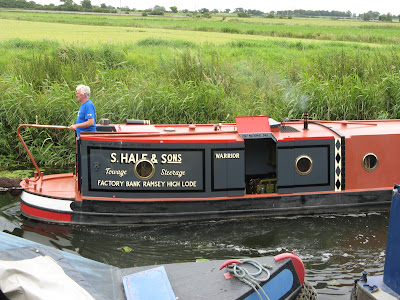 Yes, at long last we got Warrior signwritten, and at even longer last, I think I can post some photos, most of which were taken by Jim, but thanks to John for the ones taken from the bank.

I have given up on Webshots this time; it randomly refused to upload about three quarters of the photos (which needless to say were all the same type and size of file), so the signwriting photos are on Photobucket, here. Whoah! Read the story first...

The original plan had been to have the signwriting done by Dave Moore. We talked to him about it, and he did the temporary writing that served us for a year. I still feel rather guilty actually for switching, although he was very nice about it, and I'm sure isn't short of work. It would of course have been the absolute ideal to have Dave do it, with his flair, experience, training and reputation, but a few factors conspired to militate against that in the end: distance, cost, and the arrival at Bill Fen of the piratically named Black Boat John, who historically did all the Shotbolts' painting and signwriting. 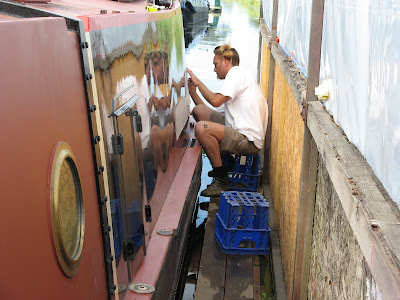 He has done a good job. The main difference, I sense, is that we had to tell him exactly what we wanted. He couldn't give us any guidance. Unlike Dave, who chalked it out freehand, John plans it all on paper first. Most of what he has done hasn't been very traditional, whereas we wanted quite a plain, 1930s, sort of appearance. Of course there were lots of disagreements between Jim and me along the way, and every time I thought we'd agreed, it seemed he either changed his mind or it turned out we were actually visualising it differently. Changes continued to be made right up to the last minute, when I wasn't there. The plan had been to have all the writing in that very plain, sans serif, quasi-Grand Union style. Jim then read (or reread) Tony Lewery's book and thought that Warrior should be writting in a slightly more ornate style (or possibly much more ornate; maybe slightly more ornate was the compromise we reached) 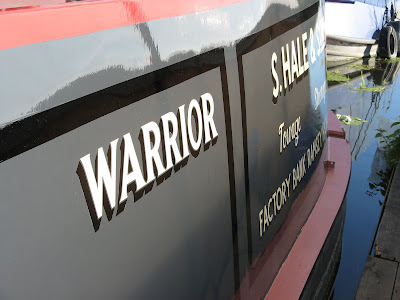 It was also from this that he was inspired to have a vertical panel of diamonds under the drainage hole in the handrail. This I must say I like very much. 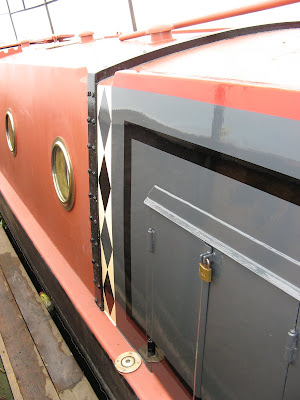 As you might gather, overall the scheme is a shameless pastiche of various aspects of old boats. It's not a replica of anything in particular, but hopefully it hangs together visually as long as you don't think about it too much. Our starting point was the age of the engine - 1937 - and the thought, what would we do if it was 1937 and we were just setting up in the tug business.

We were going to have both our names on it, but Jim decided either that that wouldn't look right (though actually the spacing would have worked well) or that he preferred to remain anonymous, so that is why only my name appears. Jim can be an honorary son. Feels like that sometimes anyway... The line under '& SONS' was in the initial plan, with both names; my idea was that in the later version the lettering should all be the same. However, John was working off the original sketch, and as I wasn't there... I'm not sure whether I prefer it or not, so I guess that means there's not much in it. 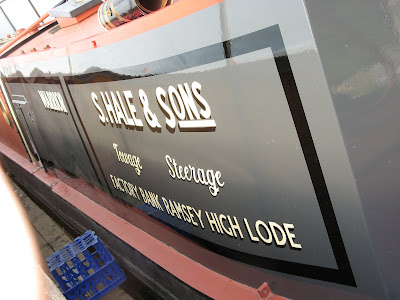 The address is the genuine address of Bill Fen, where we moor of course, and very near where Warrior was built, and it has a lovely ring to it, I think. Factory Bank runs alongside the High Lode going into Ramsey where the lorry breakers etc are, so is suitably gritty. I am slightly bothered by the thought that if one was setting up a tuggage business in the Fens one wouldn't necessarily have a narrow boat, but maybe someone could find me a precedent. 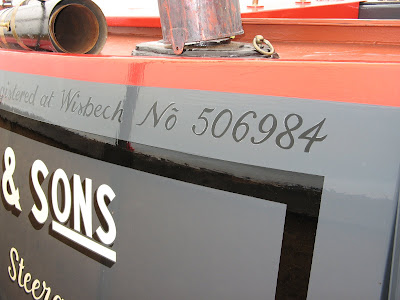 Wisbech was a genuine registration authority (they're listed in the Spring 2007 issue of NarrowBoat mag); and we just liked it better than Peterborough, which was the alternative 'local' one. Clearly if we plied our trade between Wisbech and Northampton and beyond (hence the narrowness, it's all starting to come together...) then we'd have to live on it.... (this may be what Emerson was referring to when he said that 'a foolish consistency is the hobgoblin of little minds'. On the other hand, he might not have been thinking of boat painting schemes. Who knows.)
Posted by S at 1:58 PM

Sarah/Jim... It looks the 'Mutts Nuts'. Well in keeping with the character of the boat (and its guardians). Congrat's

Blimey, that must be the quickest comment ever. Have you nothing better to do?

It looks brilliant folks. WHAT a DISTINCTIVE boat! Warrior looks great in his new suit of clothes
Nb Caxton

Hopefully we'll get to see the real thing looking even more resplendent than in the photos!

I'd just got in from doing a bit of assembly in the garage. But I'll save that litlle teaser for another day's blogging ;-)

That 1:58 is a lie. This thing times posts by GMT and comments by BST. Look forward to seeing your latest - it's looking really impressive.