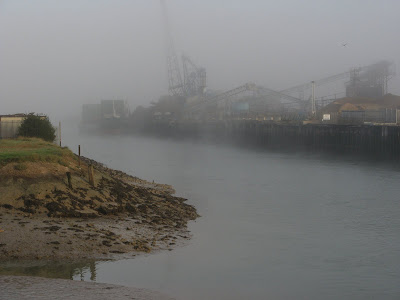 Here's a rather interesting story from our local paper, the Sussex Express. There was a slight degree of minor consternation a few months back when it was announced that some sort of drink/drive limits were going to be imposed on boaters. Well, if there's anything in this story, then they won't need to bother with new regulations.

In short, the captain of a ship delivering aggregate was suspected by customs officers of being drunk some three hours before his ship was due to leave Newhaven. The customs officers called in the police, who attempted to breathalyse him. So far, so good - being drunk in charge of a ship is presumably a crime under maritime law. But when he refused, he was charged not under any maritime law but under the Road Traffic Act, according to the report 'after prosecutors were unable to find a more relevant charge.' Apparently this has made legal history, his defence lawyer saying that there appeared to be no precedent for it. Well, there is now.

Having been kept in custody for four and a half days, the ship's captain pleaded guilty to refusing to take a breath test, so, sadly, the use of this law was not tested in court.

Whatever the evils of being drunk in charge of a ship, it is nonetheless worrying that someone can be charged, kept in custody, convicted and fined under a law that was never intended for the purpose. Not really surprising, though.
Posted by S at 7:07 PM