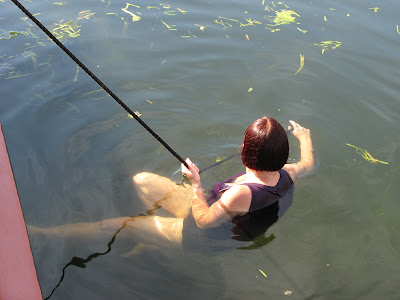 Well, here we are at Stanground after an extremely pleasant, although not uneventful, day. We got to Bill Fen in the car at 10.30 this morning, topped up with diesel (£130.64), and left at one o'clock. It was a perfect day for boating, lovely hot sun, and I was trailing my feet in the water (one of the many advantages of a tug foredeck) and toying with the idea of getting right into the lovely clear water. It's like an subaquaqueous forest, of fantastic plants, populated by fascinating darting fishes.

So we watched the water temperature guage rise and rise, as we always do, and just at the point (around four o'clock) I went to tell Jim that it was over 100 and the oil pressure was 15 (it should be 18-20) there was a sound like Vesuvious erupting and the expansion tank boiling like a kettle, so we considered it politic to stop and drift around for a bit.

Jim has long held the view that the overheating is exacerbated by weed on the skintank (not going too fast, oh no) and we wondered if there might be a way of getting at it. Baz suggested that he could get into the water and have a look - or, at least a feel. We didn't have a scraper, but equipped him with the coal shovel, and he bravely lowered himself into the water. Well, the conclusion was that there isn't significant weed growth much below the waterline, but he looked like he was having such fun that I wanted a go. This might be the only opportunity - too much current on the Nene, too much filth in the canals. The only drawback being that I am a notoriously bad swimmer and the water was a good ten feet deep.

However, to compensate, I have mastered the art of floating, so I too grabbed a rope and eased myself in. Keeping hold of the rope, I had an absolutely wonderful time floating and splashing about. Although I have a deeply embedded image of myself as a non-swimmer, inculcated from my utter hopelessness in the school pool, which had very bitter green water and was lined with slimy polythene, I now realise that I can propel myself at least eighteen yards (how do I knowe that, I wonder) It's getting out again that's the thing. It's easy when you know how, and have two strong assistants though. The trick is to turn your back on the boat and be hauled up by the arms. It doesn't even hurt. Baz could haul himself out; playing the double bass is very good for upper body strength. I have never swum in fresh water before; it was absolutely lovely.

So after things had cooled down a bit, and we'd topped it all up again, we set off at about half past five, and got to Stanground just before nine. We're booked to go through at about 9.15 tomorrow, so will get full value from out three day Nene licence (must remember to affix it!)

WE also went through one lock (Ashline Sluice; I wonder if Helyn's boathook is still at the bottom of it), and we saw an owl.
Posted by S at 8:45 PM

As I read this, primed by the photo, when I got to the phrase "So we watched the water temperature guage(sic) rise and rise," I leapt to the instant conclusion that Warrior has a little dial to tell you when the river has reached a suitable temperature for a quick dip. "Now there's posh", I thought. Actually, it's probably not much use in these climes, but if Melaleuca ever does a Narrow Dog and heads for the Med, I'll be sure to hang out a thermocouple.

Can I have a go!? It looks delightful! By the time we get to the Middle Levels it'll be autumn :( So jealous of you having begun your cruise! But tomorrow we'll be on the Duck so not long now, and we'll see you in Cropredy - enjoy your trip!

(spelling mistake in above post - hence the deletion - i am a perfectionist!)

How can you have got to the age of 31 without ever having seen a woodpecker for goodness sake :)

Keep an eye out at the marina. Green woodpeckers are frequent visitors (usually to the grass next to the cut, where they eat ants) and I have occasionally seen a great spotted woodpecker on the bird feeders by my boat.

Yesterday, as I was tapping away on the keyboard, earning what I like to call my living, I looked up to see a kingfisher perched on my mid mooring line.

I said 'bon voyage' to Sebastian and Jim as Warrior chugged out of the marina into the cut, but you were hiding below for some reason :)