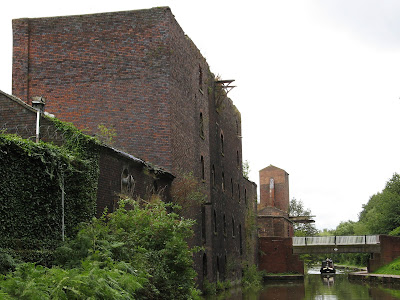 And there goes another one. Wedgwood (or Waterford Wedgwood as we should now more properly know it) has gone into administration. Throughout my childhood, I had a green Jasper ware bedside light. It wasn't very nice, to be honest; the shade was horrible, but I used to lie in bed and stare at the base, with its bas relief of Greek figures. That's what Wedgwood has always meant to me.

But also of course, the company, and in particular its founder, were enormously influential in the development of the canals. Josiah Wedgwood was promoter of one of the earliest, the Trent and Mersey, for which the Act of Parliament was obtained in 1766 (yes, I have quickly scanned my Hadfield). It was impressive, coming through the Potteries with Andante in 2006, how much stuff was still being produced - despite there also being a lot of dereliction and even some regeneration. But surely this is a prime example of a product that can be produced as well, and more cheaply, overseas; how many of us, to be honest, care where our dinner plates come from? Mine are in fact (I've just looked) from Staffordshire, Bilton's 'Galaxy'. But they were probably made in the sixties. Biltons are (I learn from Stoke on Trent City Council's informative website) no more.
Posted by S at 7:47 PM