Until I realised that it would align me with a Daily Mail campaign, I was quite attached to old fashioned incandescent light bulbs. I never quite got round to stocking up on them before they disappeared from the shelves - the demise of Woolworths put paid to that, somewhat procrastinated, notion, but I still maintained that the replacements couldn't save that much electricity as the fact that they take so long to warm up means that you never turn them off... That and the deadly poison. In all seriousness, this does have about it the whiff of a policy that wasn't quite thought through.

There was, however, a fairly convincing piece in the Guardian last week that persuaded me that not switching over to energy saving bulbs is in fact morally equivalent to raping a polar bear. So I will accept the coolly flickering domestic gloom with something approaching equanimity. No more 100 watt bulbs for me. 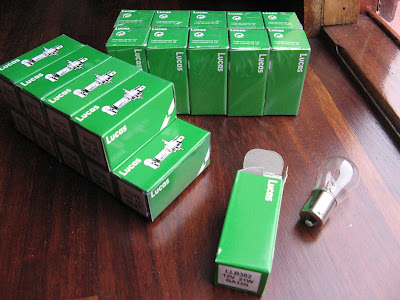 Fifteen* watt ones are a different matter. Let's face it, on the boat - at least with the fittings we've got - compact fluorescents are not a possibility. Ironically, though, alone of everyone I've ever met, I actually like flourescent light; at least the old fashioned sort than emanates from long tubes. At least it's bright. And it's diffuse. What I don't like is concentrated spots that get in my eyes. Had fluorescent tubes on Andante; absolutely fine. But Warrior has those directable spotlights and we're pretty much stuck with them. We've tried the LED bulbs - to save on battery as much as anything else; say what you like, but with hauling your coal in and worrying about your batteries there's nothing like boating to make you aware of your energy use. Hmm, and your waste disposal. But they gave up the ghost very quickly, and were flickery and unreliable. So it's tungsten bulbs for Warrior. And just to make sure we don't run out, or have to buy at chandlery prices, we stocked up at Ramsey Motor Factors for fifty pence apiece. They were also excellent at finding us the bulbs we needed for the old brass bulkhead lights in the engine room and back cabin.

*oops. 21 watt actually, as the photo clearly gives away. I thought they were nice and bright.
Posted by S at 7:55 PM